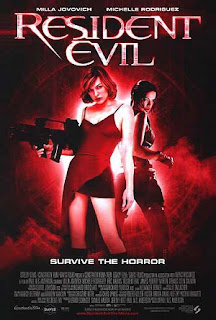 This review may come off as biased. Since I, for one, am a HUGE fan of the Resident Evil game franchise. Been playing it since the first one hit on the original Playstation. That being said, the first Resident Evil film is a whole bag of hit or miss. Despite being stylish without some charm along the way, this film is bogged down by poor storytelling, some poor acting moments, and a rather 'tries to hard' attitude. It does the occasional smart maneuver, but still falters too much to truly rise above its silly and poorly executed ideas.


Alice (Jovovich) finds herself waking up naked in a tub with very little memory of who she is and how she got there. I know that's probably happened to most of us on occasion or two, but when a military strike team invades the mansion she is in and takes her down into a secret laboratory with them, she finds herself trying to remember a bit harder. Turns out a seriously nasty virus has leaked and turned the folks downstairs into some crazy monsters including zombies, dead dogs, and a monster with no eyes and a wicked long tongue. Can Alice help her new found military pals survive the horrors of the lab and its defense systems before she becomes zombie feed?

Here's both the problem and saving grace of Resident Evil: Paul W.S. Anderson. Now, here at Blood Brothers we have some serious love/hate relationships with this man. He's a snazzy director with lots of style that can blend great action into anything. See Event Horizon for one of best films. The problem with Anderson is his writing. He writes almost everything he directs (and more) and he sucks at it. Despite his sleek and action filled horror approach to directing Resident Evil, which is truly the best and perhaps only great thing about this movie, the script for the film feels rushed. The dialogue gets you through at best, the pacing is hit or miss, and the whole film feels a bit confusing about some of its moments. That's just the broad strokes of what is missing from the script. The rest of what is included in the film is less horror and more silly action film, so take everything with a grain of salt. When you had a story as strong as that of the video game and you veer from even the BASICS, then you must be ignorant. Or arrogant. Or both.

Anderson also loves to use B-movie worthy actors and actresses. Although Milla Jovovich can be good, her character Alice is poorly developed and it feels as though she has very little to work with. Throw in a supporting cast of relative unknowns, sans Michelle Rodriguez whose B-movie status was already being crafted well by the time this film came out, all with characters that could have used some sort of back story or enough value to care whether they did make it out alive, then the cast comes off as more of a burden then element of worth. Not that its their fault entirely, it would have helped had they had characters to work with (that's another jab at Anderson's writing by the way).

Visually, Resident Evil is sleek and fun with lots of charm (although Anderson does love to use CGI way too much) and with some solid action sequences. Unfortunately, there is not much behind it to support the gloss. The script is poorly crafted and the acting comes off as half assed. Although it was nice to see Resident Evil get the big screen treatment, it just never had the heart, atmosphere, or storytelling that the game was known for and that's a shame. On its own, it works to be a fun, modern B-movie.

BONUS PRAISE: A solid star of this film's rating goes to Marilyn Manson. Why, you may ask? Because this shock rocker did the amazing score to this film. His weird atmospheric and industrial-esque winding score does wonders to enhance the viewing pleasure of the film making rather lackluster 'scare' scenes halfway work and the action scenes rather intense. Who knew, right?