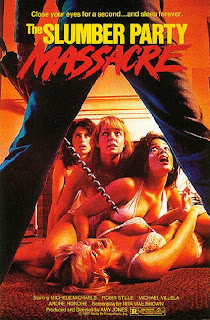 Most slashers in the wake of Halloween were serious, or at least took themselves seriously even though there might be some unintentional laughs. Leave it to Roger Corman to change the formula a bit by making the slasher film sleazier, trashier, funnier, and even more entertaining with the likes of the humorously titled Slumber Party Massacre.

With an attention grabbing title and it's revealing, provocative poster artwork which features some scantily clothed beauties at the mercy of a maniac with a drill (phallic symbol anyone?), it doesn't take a rocket scientist to figure what the film is about. Right away in the film we are told a maniac as escaped from an insane asylum, not hiding it's influence from Halloween. We are then introduced to a handful of girls (who are shown nude a lot) who are going to have a slumber party. Of course who shows up other than our maniac, sporting a drill to kill our beauties. There are also some dumbass horny boys following the girls also that serve no purpose other than fodder for the slaughter.

Surprisingly this exploitative film is directed by a women. As a matter a fact all three entries in the series (not including the dreadful Cheerleader Massacre) were directed by women even though the series is known to exploit the skin of females. There is even one sequence that takes place in the girls locker room where the camera actually pans down to show a girls bottom. No point to the pan other than a nude shot!

What I liked about the film is that director Amy Holden Jones inserted many moments of black humor. The one sequence that strikes in my mind is when a pizza delivery man rings the door bell, the girls open it only to reveal that his eyes have been drilled out and then he collapses on the floor. One of our girls even attempts to eat a slice of pizza the dead body is holding because she was hungry! I actually find myself snickering at many moments throughout the film adding to its sheer shameless entertainment value.

The film's production values are low but it still has that wonderful early 80's grindhouse feel about it. I only wish the film was a hair longer as the run time is rather short, clocking in at only 77 minutes. Still with a short run time it ensures the film will not overstay it's welcome and it doesn't. Actually the more I think about it perhaps it's the perfect run time for the film as it does have a good pace and it's not like we need any character development for a film of this nature.

With a film like this you can't expect art. If you do then you are as insane as the film's killer. It's a cheesy, trashy slasher film with shades of black humor. I'll admit it, I had fun with the film even if the film-making approach was shamelessly exploitative.