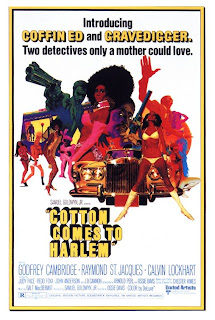 When I first heard of Cotton Comes to Harlem, I originally got the inclination that the film was bout a guy named Cotton that comes to Harlem. Far be it from me to actually expect an actual bail of cotton is what the title is referring to! This is just of a taste of a interestingly little, albeit forgotten Blaxploitation film.

Our film opens with two cops keeping an eye on a shady religious figure, who seems to be working up a large following. Of course he is getting people to donate their hard earned money for him to make a trek back to Africa. He of course intends on stealing the money, so he hides the dough in a bail of cotton and stages a robbery. The cops know what he's up to but other people get wind and the bail of cotton it keeps getting stolen and disappearing until the cops don't know where to look or who to trust anymore.

I like how our two cop characters are more realistic compared to other films in the blaxploitation genre. Their less focused on being "cool" and come across tough by just being more normal, hard working detectives. This is no doubt one of the reasons the film isn't as popular as audiences enjoy the over-the-top coolness of such kats as Shaft and Superfly. Though director Ossie Davis keeps our cops normal (other than their character names), he does add some nice comedy touches to the film. An example is during a car chase, we have a pick pocket steal a woman's purse, run out into the street only to be hit by the car the cops are chasing. Sequences like this brought a smile to my face.

If I had to complain about one aspect of the film it has to be the third act and the film slows down to an almost grinding halt. The film's climax takes place in a theater the film starts focusing on the woman dancing for what seems to be 10 minutes. An attractive women she was but holy hell it was it completely pointless! The rest of the film just meanders away and never truly recovers.

Overall though this was an entertaining Blaxploitation film but fans will no doubt would rather see super cool kats like Shaft as opposed to our cops Gravedigger Jones and Coffin Ed Johnson (cool nicknames I do have to admit). I say give it shot. The humor is good but not obtrusive and the characters are interesting (interesting enough to inspire two rarely seen sequels). I recommend the film if one can get through the humdrum final act.