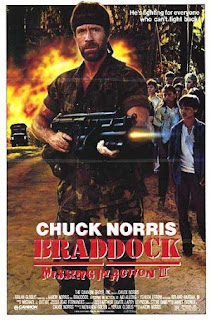 After the disappointing prequel which was Missing in Action 2, Chuck Norris took the reins of this second sequel by co-writing it and even getting his brother Aarron Norris to direct. The result was surprisingly good and far better than any sequel should be with Norris writing and a stuntman directing.

The film opens in Saigon and the continuity errors are blatant right away (more on that later). We have Braddock in Saigon moments before it falls to North Vietnam and American forces are pulling out. In the midst of the chaos, Norris's Vietnamese wife loses her papers on her way to the American embassy and is not allowed to leave. Norris, thinking she's dead, evacuates with rest of the troops. Years later Norris is approached by a priest saying that his wife and child are alive. Norris, disbelieving at first, eventually comes to believe and in good MIA fashion heads back to Vietnam to rescue his wife and son with the aid of an old war buddy. Of course it isn't going to be easy as they are held captive by a sadistic general who takes great glee in torturing Vietnamese-American half-breed children.

The opening of the film is the highlight as even with a lower budget (compared to the first two films), the production values are just fantastic and it really looks like the fall of Saigon (look for the great Keith David as a gate guard). The character of Braddock does lack some of the psychotic edge of his character in the previous films but Norris is still likeable as ever in his typical nice tough guy mode. Aki Aleong is also terrific as our sadistic general but they do have his character yell "Braddock" just a little too often. I will hand it to these Missing in Action sequels as they do get great actors to make truly unlikeable antagonists. Ron Barker makes a rather blah carbon copy of Braddock's war buddy M. Emmet Walsh from the first film and there are a few wince away bad lines like "I don't step on toes, I step on necks", but these are just minor hindrances.

The main aspect that rattles my cage a bit with this sequel is for its complete lack of continuity to the first two films. It is very obviously said in those films that Braddock was in a POW camp and didn't even know the war had ended. Here for some damn reason he is in Saigon during the end of the war and it doesn't even seem like he ever spent time in a POW camp. There must be two Braddocks! The second film also mentions that Braddock has a wife back in the states but in this film he is married to a Vietnamese woman. What?! Did they think fans wouldn't notice these blatant disregards to continuity and plot points?

Continuity problems aside, I actually was flabbergasted by this sequel and it came out MUCH better than I was ever expecting. I would even rank this entry a hair better than the first film but I do seem to be in the minority as this sequel is rarely talked about. For a lower budgeted sequel I was really impressed with the production design and I also dug how the film was more emotionally driven. I can't believe this sequel isn't held in higher regard when it comes to the fans.

Bonus Rant: The title is no doubt a take on the title Rambo: First Blood Part II in order to make the character Braddock a household name when it comes to action heroes. What's next? "Braddock IV" and then simply "Braddock"?

Written By Eric Reifschneider
Posted by Cronosmantas at 7:51 PM