BattleTruck [Warlords Of The Twenty-First Century] - 3/5 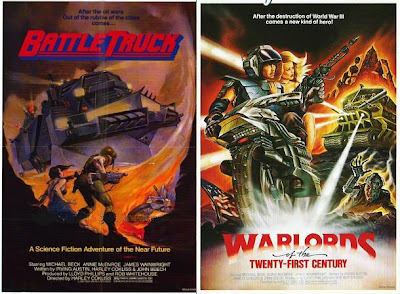 I remember seeing the video artwork to Warlords of the Twenty-First Century (also released theatrically as BattleTruck) on our local video store shelf and I always intended to rent it but sadly never did. Now finally, after all these years, I was able to view this seemingly forgotten post-apocalyptic film and it just saddens me I never got to see this as a kid as no doubt it would have been one that I watched a lot. Post-Apocalyptic setting with a giant armored semi... sounds like a young boys dream to me! Well... at least my dream.

The film opens with a simple yet extremely effective sequence with black smoke rising into the skies with a cackling, broken up radio broadcast stating how that radiation levels are still high and that a rogue group in an armored vehicle are terrorizing the roads, stealing all the fuel and goods they can. Apparently it's the future and after the "oil wars" the world's economy has collapsed and gas has become a scarce commodity (vaguely familiar of... what's that other popular post apoc film... oh yeah, THE ROAD WARRIOR!). The leader of this rogue group that drives the "BattleTruck" is a mean mother fucker and his daughter has had enough of his evil ways so she escapes only to be rescued from his men by a loner "mad max" type of anti-hero named Hunter (Michael Beck, of The Warriors fame). Not wanting company he decides to drop her ass off at a local village where she becomes a member. Not long after her father and his bastard BattleTruck move in and it's up to Hunter to rescue the girl and save the village.

There are many parallels that can be drawn up between this and The Road Warrior and it's easy to see why people consider this a "rip-off" of it (it is produced by Roger Corman, the master of rip-offs for Christ Sake!). This however isn't the case as they actually were both made at the exact same time. Director Harley Cokliss (cursed with one of the worst names in the field) actually goes so far to admit that George Miller, director of The Road Warrior, might have seen his script before starting on his film. Now that's food for thought! No matter what the case both films were made and released at the same time and Miller's film won out, becoming a worldwide success with BattleTruck fizzling out into obscurity. That however doesn't mean BattleTruck is a bad film and to be honest I was quite surprised on how good the movie was and there are many respectable elements within it.

I actually really enjoyed the plot which is very reminiscent of a western, just set in a post apocalyptic future. The characters are for the most part interesting and the villain is downright evil. This guy shoots and kills people for just looking at him wrong! Our hero "Hunter" is nowhere near as interesting or complex as, let's say, Mad Max but Michael Beck is adequate. The part that impresses me the most about this film is the production design. I can't believe how good the BattleTruck looks with a film that really had no budget. Harley Cokliss really utilizes his budget well and makes the film look like it had double the budget it really had. Still though it's budgetary restrictions do show up now and again and sadly the action sequences do suffer a bit.

With a little higher budget BattleTruck could have been grand but as is it is a good post apocalyptic B-movie. Again I was shocked by how good it was as I was expecting some bad trashy entertainment. I've seen so many of the Italian post-nuke flicks that are entertainingly trashy that I just expected this to be the same. Not so. I highly recommend BattleTruck for fans looking for a good, lost post apocalyptic films. Even with story similarities to the Road Warrior, if one doesn't expect this to be as good as that film, then you think you will enjoy.