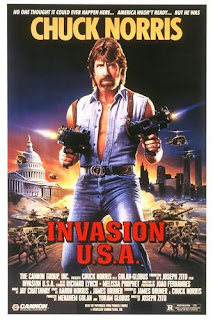 Invasion U.S.A., Death Wish 3, and Revenge of the Ninja are hands down my top three favorite guilty pleasure films from my favorite production company Cannon Films. Invasion U.S.A. reunites Missing in Action director Joe Zito and star Chucky Norris and they both up the ante in their second outing. Overall Invasion U.S.A. is a worse film than Missing in Action but it does out due that film in one aspect... and that is pure trashy entertainment value!

Don't be completely fooled by the poster art and title of the film. The poster art and title gives one the impression that this is going to the one man army version of Red Dawn. Chuck Norris single handedly taking on the entire Russian military! Sadly the film isn't quite that big in scope as Norris only takes on a small Russian/Cuban army (more like terrorists) who make a make a very small beach invasion in Florida in order to wreck chaos and destruction in the good 'ol US of A. The leader of these terrorists (Richard Lynch) is haunted by his old confrontations with ex-special services soldier Matt Hunter (Norris, of course) so he decides to send a small group up to kill him in his humble bayou home. Norris of course senses their presence (insert Norris joke here!) and survives the onslaught on his house so Norris makes it a personal mission to take Lynch out and foiling all of this terrorist schemes.

This is cheesy action at its most extreme and serious! Like Missing in Action, director Joseph Zito and Norris take the film seriously and Zito loads the film up with uber violence and action sequences. The film's best action sequence is by far a mall shoot-out where Norris literally drives his pickup in through some mall doors in order to take out some terrorists shooting up the place. This sequence is followed by a real kickass chase sequence with our terrorists holding a hostage on the outside of their car!

Norris is basically playing Braddock again and thankfully Zito gives him psychotic edge back. Lynch makes a great villain here (what film doesn't he in?) and his extremely violent edge makes him a great counterbalance to Braddock...err... I mean Hunter! The one character I have to complain about is the reporter "love interest" who is just completely annoying and irrelevant to the plot. Norris reportedly wanted Whoopi Goldberg to be casted in the role and thank God Zito put a co bash on that!

People who remember the Chuck Norris jokes that became popular a few years ago will find many of those jokes apply to this film. Chuck Norris doesn't sleep, he waits... yep that joke applies here. In one sequence an old boss rows a boat in the middle of the night to Norris's house only to have Norris sneak up behind him by surprise. Norris was wide awake.... like he was waiting! The film is also loaded with great cheesy lines like "If you come back in here, I'm going to hit you with so many rights you're going to beg for a left!"

Invasion U.S.A. is a high budget "bad" action film and many people wonder why Norris went back to Cannon to make these films after making that rather critically acclaimed action film Code of Silence. Though I like Code of Silence I am still extremely ecstatic that he went back to making B-action films! Invasion U.S.A. is definitely one of the kings of the B-action genre and anyone with a soft spot for these type of films should love it. A sequel also followed called Avenging Force with Michael "Dude"ikoff taking over the role of Hunter.