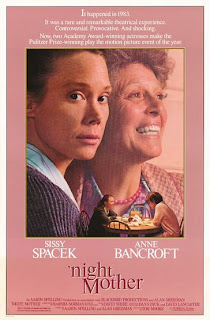 People who frequent this website no doubt are wondering why the hell I'm reviewing such a film as 'night Mother. It is true that I mostly review cult type films including action, horror, science fiction and B-movies of all sorts. Still it's amazing what a college education can open your mind to as without my college literature course I would have never read or watched one of the most depressing plays and films I have ever seen, the popular award-winning play turned to movie 'night Mother. I of course first watched the film 4 or 5 years ago and I've always remembered it's power. My wife who loves these emotional dramas always wanted to see the film and thanks to Universal for finally releasing the DVD, I was finally able to rewatch this depressing classic and I honestly say it's still as depressing as it was the first time I viewed it.

One could just sum up the film as a "movie about suicide" but that doesn't due the film justice. It's for more complex than just that and it involves the importance of having a niche in society, reputation, and the resentment of a child towards a parent. The film opens with middle aged woman named Jessie (Sissy Spacek) getting everything prepared and prepped to commit suicide. She has recently moved in with her mother (Anne Bancroft) since her husband left her for another woman due to her epileptic fits. Spacek reveals her plan to her mother and the rest of the film is her mother trying to convince Jessie not to take her own life and Jessie retorting answers on why she should. Throughout their arguments many skeletons in the family's closet are brought to life making for one emotional roller-coaster. Bancroft tries every type of action to stop her daughter's drastic measure by first denying the action, then begging, then showing anger, then sadness which finally turns to violence. By the end of the film the audience is on the edge of their seat to see if the mother will succeed to stop her daughters attempt at taking her own life.

A film of this nature depends on the strength of its two leads and the film is perfectly cast with the two strongest actress's they could find for the parts. Why Sissy Spacek and Anne Bancroft didn't get Oscar nominations is beyond me and it just seems criminal. The film is so wonderfully written by Marsha Norman (author of the play) that it feels like one is drowning while watching it, with the tension just building and building until your lungs collapse under the pressure. The direction by Tom Moore (director of the Boadway Play) is very standard but one can't have flashy directing getting in the way of our plot which is all spoken by dialogue. It is strange for me to write that as I love flashy directing but it would not be kosher with this film. The production values are also low but with a plot of this nature that only takes place in one setting one doesn't need a high budget.

There you have it, a simply made film with two powerhouse performances giving us one of the most engrossing, emotional and saddening motion pictures this reviewer has ever seen. For a guy who loves manly man movies, this film still manages to bring a tear to my eye. Perhaps it's due to the fact I suffer from an extremely painful temporomandibular joint disorder in my jaw that makes me have such a strong connection but I believe this film will tug at anyone's heart strings. My wife even got so emotional during the film that she wanted to shut it off three quarters of the way through. It's a film that will make you think and stick with you for a long time to come. If you are an emotional person then make sure you load up on Kleenexes before attempting to view.

Written By Eric Reifschneider
Posted by Cronosmantas at 7:53 PM