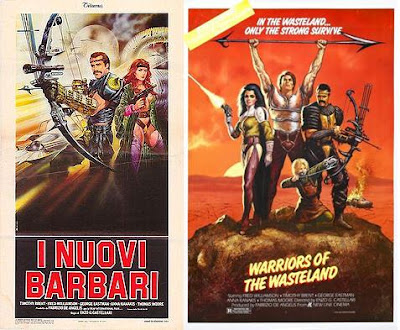 Oh Enzo! The New Barbarians (also released as Warriors of the Wasteland) further proves how a once respectable Italian director can circum to making complete trash in the 80's. His bleak future trash classics 1990: The Bronx Warriors and its sequel Escape from the Bronx, though entertaining, showed a director that was a shadow of his former self. The New Barbarians showed Enzo further descending that staircase from his thrown as this is even a step below those trash classics. Yes it still manages to entertain thanks mostly to Enzo seemingly having fun and not taking the material too seriously.

The New Barbarians (originally released in America as Warriors of the Wasteland) is another one of those Italian "Road Warrior" knock-offs that seemed like they were a dime a dozen in the early 80's. The film opens with an awful miniature effect with a nuclear bomb explosion in the back ground so it's safe to say that a nuclear war occurred and all that's left is roaming warriors on the highways. It seems that style and fashion has taken a turn for the queer in the future with warriors roaming around with silly haircuts, outrageous outfits, and driving moronic cars that make high pitched whines and whirls. Our bands of surviving humans are terrorized by a group called the Templars who are trying to wipe out humanity. In comes our Mad Max hero (named Scorpion, played by Giancarlo Prete whom you might remember from Escape From the Bronx) and with the help of some sidekicks (one being Fred "the Hammer" Williamson!) decide to attempt to take the Templars out.

Thankfully Enzo doesn't take the film too seriously as the film is truly awful, but not to the extent that it's unwatchable. It's actually got plenty of entertainment value due to unintentional laughs making this a great midnite movie. One shocking element Enzo includes is an odd rape sequence of our hero by the leader of the Templars (George Eastman). I kid you not! They capture him, load him up in a special contraption that bends him over and Eastman has his way with him! The sequence is so outlandish that it's unintentionally hilarious! Can you imagine Mad Max getting raped? It's a gutsy move by Enzo but it just comes out ridiculous. Another very quick absurd image I can remember is a shot towards the beginning of the film where it shows the skeletal remains of a woman in a hazmat suit that has clear plastic domes over her breasts. I highly doubt women will ever wear outfits like this but it was a nice joke the filmmakers threw in (at least I hope it was a joke).

Many people will no doubt think this belongs in cinema wasteland but I still had fun even with all its badness. There's something about these trashy Italian Road Warrior rip-offs I find insanely entertaining and The New Barbarians is definitely one of the best in this regard. It still amazes me Enzo directed it though as his 60's and 70's outings are classics of Italian cinema. Then again he wasn't the only director to take the trashy route of films when the 80's came rolling around...

Bonus Rant (Spoiler): The ending is complete rip-off of Fistful of Dollars. Our hero hires a young boy (Bob form House by the Cemetery!) to build him a bullet proof coating on his skin that's made of some special kind of plastic. Hokey beyond belief!

The New Barbarians Trailer
Posted by Cronosmantas at 6:42 PM