Spacehunter: Adventures In The Forbidden Zone - 2/5 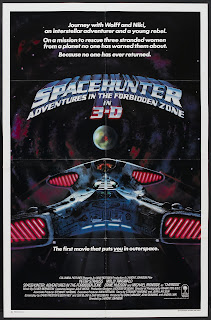 Out of all the 3-D science fiction pictures that came out in the early 80's, the long-winded Spacehunter: Adventures in the Forbidden Zone was one of the most popular. Does that make it good? Well no, but it does beat out a lot of the others (most notably Metalstorm) thanks to a solid cast and better productions values making for a somewhat fun, cornball science fiction ride.

Peter Straus plays our title character and as you can tell from the long subtitle that he goes on an adventure into a Forbidden Zone. Well you see three beautiful women crash-land on an E type planet (E, as in Early-type.....oh jeez) that's full of road warrior type clans and cannibals. Strauss is an "adventurer" for hire so he is hired to rescue the girls before the evil ruler Overlord (Michael Ironside) has his way with the girls. So Spacehunter and his android roam the planet in their futuristic vehicle and with the help of an annoying young girl (Molly Ringwald), they try to beat his competition (Ernie Hudson) to rescue the captive girls. Along the way they run into all sorts of weird situations they have to escape from, including a water race of super women and some monstrous fat humanoids.

A majority of the film is standard space adventure material and fans of this type of science fiction have seen these type of films before, most likely better. My main beef with the picture is our lead hero. He's supposed to be a loner, anti-hero but Peter Strauss's performance and how he is written makes the character rather boring. He is just a very blah, uninteresting anti-hero. Molly Ringwald's character is annoying as ever but it is the way the character is written so she does an adequate job in her first major role.

For a film that was filmed in 3D, it actually surprisingly lacked the "comin' at you" shots of shit flying at the camera. It also doesn't have that dull, washed look that many 3D films at the time get when getting a home video release in flat 2D format, which is good. I'm sure people at the time were disappointed as it lacked all the 3D gimmickry of shit coming at the camera but it makes it transfer to the 2D format much nicer without all those shots. I did get a chuckle at the 3D title sequence when the name Spacehunter breaks trough a piece of steel jetting out into the camera. The part that made me chuckle is when the subtitle jets out, it's so small and long that it's almost unreadable. The subtitle is too long fellas and not mention pointless! Newer DVD and VHS releases even did away with the subtitle on the box artwork, showing how pointless it is. It's like they added it as if they were intending on making a sequel. Much like Metalstorm, a sequel never got made and I doubt anyone will be crying over that fact.

Spacehunter has enough cornball sequences to please fans of cheesy science fiction adventures, but everyone else will find it forgettable. I would have enjoyed it more if our anti-hero was more interesting. He's just a bore! Thank God all the wacky situations they get in introduces much more interesting side characters.