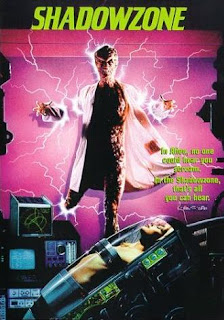 Typical with Charles Band productions, Shadowzone falls into the same category of having a really interesting premises that just crumbles under typical horror and science fiction clichés. Even with those major faults, this is actually a surprisingly good early Full Moon production from a studio that has managed to only release crap in recent years.

The film opens with a nice atmospheric night shot of a military investigator being flown into a remote Nevada testing lab that is deep below the Earth's surface. It seems that a group of scientists experimenting with dreams and deep sleep have had a test subject die so he is brought into investigate the mysterious death. When the scientists re-intact the experiment, they release a life form from another dimension that starts to stalk our cast in typical Alien fashion.

For a Full Moon production, this film is actually taken very seriously. I'm use to their output mostly being tongue-in-cheek so it is refreshing to visit an older film in their library and getting a serious film instead. The production values, though still lower, are also a lot more lavish than their typical output. The lab itself is wonderfully lit giving it a dark, dingy atmosphere adding to the creep factor.

What hurts the film however is some dreadful dialogue and our cast consisting of seasoned vets Louise Fletcher and James Hong can't even deliver it believably. The last act of the film also degrades to typical monster movie material as our creature kills our scientists one by one. One sequence even highly resembles the cat sequence in Alien only with a monkey substituted for the cat. Speaking of Alien, Richard Band's score also seems to highly "steal" from Jerry Goldsmith's score for that film. The film also not only borrows from Alien but also from The Thing as our creature has the ability to shape shift into different organisms.

For a direct-to-video science fiction horror hybrid, Shadowzone isn't too bad. Just don't go into it expecting anything overly original and sci fi horror junkies might find the premises worth their attention.