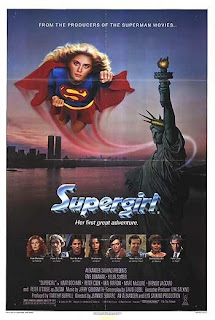 Superman III and IV are considered two of the most disappointing and bad sequels in a major franchise ever made. Still there is a worse entry in the franchise. An entry that nobody likes to talk about. It's an entry that the distributors even refuse to put into the Superman box sets. This dirty little secret they want you to forget is the 1984 Superman spin-off Supergirl.

Yes Supergirl is a direct spin-off from the Superman franchise. Not only is it produced by Ilya Salkind , producer of Superman 1-3, but it also has returning characters from that franchise and it even makes multiple references to events in those films. If you want to get technical this really is the first Superman IV, even though the man of steel himself doesn't make an appearance in person.

The film opens with a fantastic title sequence very reminiscent of the first two Superman movies accompanied by a huge, superhero score by Jerry Goldsmith. Right away you can tell they spent a pretty penny on this film. The film however degrades right away once the actual movie starts. We are introduced to a group if surviving people after the destruction of Krypton (Superman's home world after it was destroyed in the beginning of the first Superman movie). They live humbly under glass on an asteroid. In comes Supergirl (cousin of Superman....yes that is lame). Well she fucks up majorly when she draws a dragon fly with a "magic wand". The dragon fly comes alive, flies through the protective glass of the compound and in turn an extremely powerful toy trinket, that makes it possible for life support in the dome, gets sucked out and flies all the way to Earth. First of alll....why the fuck is a dumb ass girl allowed to play with a toy trinket that is so fucking important that they can't live in the dome without it?! Shouldn't be under lock and key where no one can get to it!!! The trinket just happens to fall right in the middle of a picnic of an evil sorceress (Faye Dunnaway) who plans to use the device for evil. In the mean time Supergirl escapes in a space ship, crash-lands in a lake on Earth, and emerges from the water already dressed in her Supergirl outfit. Where did she get that? Do people from Krypton have the uncanny ability to pull blue "super" outfits out of their asses? The rest of the film is Supergirl battling the sorceress and her black magic to get the magical cracker jack toy back before her race dies out. Where is Superman you ask? Well thanks to a car passing by we hear on the radio that he is off the planet negotiating peace or some bullshit in another galaxy. So yes, she has to fight the bitch on her own.

This spin-off is dumb, dumb, dumb. The original two Superman films rode the line of light-hearted adventure and dumb but it worked making for some really enjoyable films. Not Supergirl as she fell off the "dumb" side of the bridge. The first problem is that our Supergirl character just comes across as a ditzy blond and acts more like a damsel in distress as opposed to a "super"hero. So much for a strong female lead. The role was also the debut for actress Helen Slater and at the same time killed her career (she however can come over to my house anytime with that tight little outfit... roar!). The plot itself is uninteresting and full of holes as it tries desperately to re-capture the magic of Superman and in turn falls smack in its face.

The film however has a great look to it and you can tell this is an extremely high budgeted film. Sadly the plot is so ridiculous and overly silly that it doesn't matter how high the budget was, it's still bad! Faye Dunnaway shines in her over the top performance but it's a thankless role for her and she seems to want to forget the film as much as the distributors.

Speaking of distributors, Warner Bros was making Supergirl while Superman III hit theaters. They decided to drop distribution when Superman III tanked leaving Tri-Star to pick it up for theatrical release. They cut the film down by 10 minutes and for years the distribution rights to the film floated around from company to company. In 2004 the rights reverted back to Warner Bros. and they re-released the film on DVD with the 10 minutes of cut material restored. Even with the rights restored back to them, they still refused to include it in the Superman box sets.

If you're a Superman completist, then you have to own this movie. It does add some more to the Superman mythos (especially in showing the Phantom Zone) but overall this is a stinker. It's hard to believe there was an entry actually worse than Superman III and IV. Don't believe me? Then watch Supergirl fucker! You'll be "glad" you did!