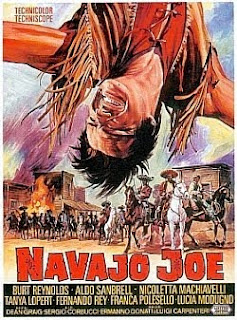 The idea of Burt Reynolds playing an Native American is enough to make any person chuckle but don't let that odd casting element stop you from seeing this rather underrated spaghetti western. The film is directed by Sergio Corbucci, the same guy that brought us Django, Companeros, and of course The Great Silence, so you know all cannot be bad no matter what Burt Reynolds says in interviews.

Corbucci spaghetti westerns are known to be violent and Navajo Joe starts off in a grand violent way with a man shooting a beautiful Native women (i.e. an Italian heavily make-upped to look Native) and then scalping her! Apparently our rag tag group of shitheads are being paid by a local town for Native scalps. It burns their bacon when they arrive to only find that an award has been put on their heads. Apparently the town isn't happy that they have been killing and scalping women and children along with the male warriors. While in the town, our head goon is approached by the town's doctor to rob a train. All goes well until our title character, exacting revenge due to the death of his people, starts foiling our goons' plans and lots of bodies start piling up.

For a Corbucci film Navajo Joe is definitely not one of his best and out of all the Corbucci films I have seen it is probably my least favorite. Does that make it bad? Oh hell no as I still had a good time with Navajo Joe. The film has the typical violent action usually present in Corbucci outings as well as strong spousal relationships. The film also has higher production values than many other Corbucci outings thanks to hot shot producer Dino De Laurentiis providing the money bags but it overall doesn't have as strong of characters as films like Companeros or The Great Silence or the trashy entertainment value of Django.

Burt Reynolds, though oddly cast, is a good hero and he is very action oriented doing most of his own stunts. The film is also aided by a very catchy (perhaps too catchy) score provided by the great Ennio Morricone under the pseudonym Leo Nichols (Morricone used pseudonyms sometimes as he would be under contract to score another film while working on a different film at the same time).

Though not a great spaghetti western, it still is good and is actually rather underrated no doubt having a bad reputation from some Burt Reynolds interviews where he openly says Navjo Joe is the worst film he ever made. What? HARDLY! Go watch a majority of his "good 'ol boy" films to see BAD. Apparently he was under the impression that Sergio Leone was going to direct the film but when he realized Sergio Corbucci was a different guy, it was too late for him to pull out. In my humble opinion Corbucci is second in line for the best Spaghetti Western director (beyond Leone of course) and Reynolds has nothing to be embarrassed about here. It may not be Corbucci's best, but it's an entertaining spaghetti western to say the least.

Bonus Rant: Some of the dialogue was either poorly written or poorly translated. When a character says to his brother "done like a true half-breed" his brother then hits him, draws his gun and says "no one calls me a bastard!" But he didn't call you a bastard, he called you a halfbreed! Is he insinuating that all half-breeds are bastards? That's hasty generalization there buddy! I also got a chuckle when a guy fired his gun and another gang member said "don't waste your fire".... something definitely got lost in the translation there.

Navajo Joe Trailer
Posted by Cronosmantas at 11:00 AM