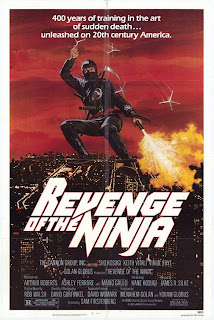 After the success of Enter the Ninja, Cannon decided to exploit this new cheesy Ninja concept so they started to develop a sequel. Actor Sho Kosugi shined in his role as the villain Ninja in that film and he proved to be very popular with the fans so Cannon opted to make him the main star of this entry. Since he lost his head in the final fight in Enter the Ninja, he obviously couldn't play the same character so one should not expect a sequel that follows any plot connections. We instead get an entirely new story that exploits the Ninja concept even further into the cheese territory making for extremely entertaining Ninja action fest that is one of my all time favorite guilty pleasures.

The film opens with an extremely violent and unintentionally hilarious attack on a Japanese family's home. Sho Kosugi and his young son are the only survivors and decide to go to America at his American partner's request in order to escape the violence and make a living by selling Japanese ceramic dolls. Is there really that big of market to warrant a store that only sells Japanese ceramic dolls? No but it does make a great silly concept to counterbalance Sho Kosugi's tough ninja character. All seems going well until his boy (played by Kosugi's real life son Kane Kosugi) discovers that the dolls are filled with cocaine! That bastard only used Kosugi to transport drugs! To top it off, that bastard is also an "American ninja" so it becomes an all out ninja war by the end!

Every cheesy ninja cliché is improved upon from Enter the Ninja tenfold here. Everything from ninja stars, disappearing smoke bombs and other ninja booby traps are used to the fullest. The result is, in my book, the best cheesy ninja film ever made. The over-the-top nature of the material just makes it a hoot to sit through. You want bloody violence and a ninja with glowing eyes in his mask? Well it is all here! One of my favorite gags is when our Ninja villain kills two people making love in a hot tub and the coroner later says "It's going to take a jack hammer to get them apart." That line gets me every time!

The film does get a little ridiculous at some points especially during the final rooftop battle sequence when our Ninja villain starts fooling our hero with mannequin stand-in's and arms. Where the hell did he get these props? Out of his ass? It still adds to the overall fun nature of the film.

When compared to Enter the Ninja, Revenge outdoes it thanks to the direction of Sam Firstenberg who gives the film much more style then producer turned director Mehamen Golan did in that film. The pace is also fast and furious with some great action sequences aided by a wonderfully cheesy score.

Revenge of the Ninja is one of the best 80's B-action films fans can ask for. It's got loveably bad dialogue, outrageous action sequences, bucko violence, and a kick-ass hero and all mixed with decent production values thanks to my favorite production company Cannon films. Revenge of the Ninja is hands down in my top three favorite guilty pleases from the Cannon Group. Things would get even more ridiculous in the next sequel Ninja III: The Domination.

Revenge of the Ninja Trailer
Posted by Cronosmantas at 9:54 PM