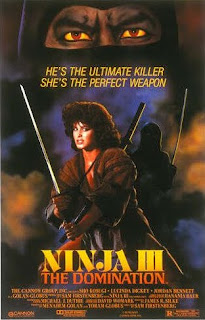 Thanks to Cannon, Ninja films became very popular throughout the 80's. What other type of film was popular in the early 80's? Break dancing films of course so it just makes logical sense to combine the two genres... doesn't it? Well no but Cannon sure made one hell of an entertaining B-action film by doing so! Also throw in hints of The Exorcist and you have one martial arts film that you won't soon forget.

In an outrageous, violent opening we have a ninja suiting up and going on a golf course killing everyone he can find. Soon tons of cops are hot on his trail and he kills what seems to be a hundred cops before finally collapsing. Before dying, he wonders off and transfers his soul to a sexy young high wire repair girl (Flashdance anyone?) who happens to teach an aerobics class in her spare time. Soon her cop boyfriend starts noticing some changes in her as she blacks out, suits up as a ninja, and starts killing off police officers that killed the ninja in the beginning. Needing help the boyfriend calls upon good ninja Sho Kosugi as "only a ninja can call a ninja". Outrageous ninja hokum ensues.

The title may be confusing to some as what other ninja films is this a sequel to? There are no films made before the film simply called Ninja or Ninja II. Well it's Cannon's third and final film into Ninja trilogy and is preceded by Enter the Ninja and Revenge of the Ninja. Like Revenge of the Ninja there are no plot or character carryovers from the previous films so basically it's just another Cannon ninja film starring Sho Kosugi in a completely different role.

As you can tell by the plot this film is extremely cheesy, outrageously so. The opening ninja fight with the police officers is a site every cheesy action fan must see! It makes ninjas out to be unstoppable monsters as he slaughters umpteen cops by every means necessary, including jumping on cars and into helicopters. It's a sequence to behold! The rest of the film is filled with insanely stupid Ninja clichés that will have any B-movie fan on the floor laughing until it hurts. I also dug the V8 foreplay scene when Lucinda Dickey pours the juice between her breasts for her boyfriend to lick up. Definitely makes me want to drink more nutritious juices!

If I had to complain about one aspect of the film, it has to be that there is not enough Sho Kosugi. Like the first film Enter the Ninja, he really is only a secondary character here being much more in the background as our main couple hog all the screen time. Even though he's a secondary character he makes the most of the scenes he is in.

Ninja III is definitely a cheesball classic but director Sam Firstenberg doesn't quit make this as good as Revenge of the Ninja even though it is more outrageous. I did enjoy it more than Enter the Ninja and it is a must see for B-action nuts. Sadly the film, like Enter the Ninja, is NOT on DVD! What the hell MGM! Like many other films I sadly sold my VHS years ago when Revenge of the Ninja was released on DVD thinking that this and Enter the Ninja wouldn't be far behind. A big thanks goes out to my friend Bill for scoring me a copy to tide me over as I patiently wait another ten years for it to be released. If you haven't done so, please sign my petition to get this and a handful of other Cannon productions to get released on DVD: http://www.petitiononline.com/cannon/petition.html