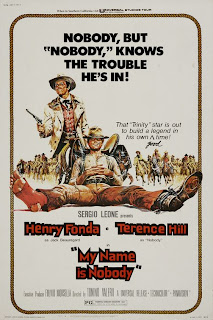 Director Sergio Leone was dumfounded at the success of the spaghetti western comedy duo of They Call Me Trinity and Trinity is Still My Name. He personally didn't find the films funny but something about those two films resonated with audiences and they became the top grossing spaghetti western films at that time, even beating out the likes of Sergio Leone's god-like entries. Leone must have decided that if you can't beat them, you might as well join them and he in turn produced and wrote My Name is Nobody, Leone's version of the spaghetti western comedy with a title that even spoofs his "My Name is Nobody" trilogy.

The best way to describe this film is an equal combination of a Leone epic and a Trinity film, and it mixes far better than one would expect. Since this was made on the curtails of the Trinity films Leone decided why not cast the same actor that played Trinity, genre great Terence Hill. His character is almost exactly the same as Trinty, so much in fact that some people even mistakenly think this is another entry into the Trinity series. On the other side the film has a grand Leone epic look to it provided by director Tonino Valerii (Leone's protégé). Leone no doubt passed on the directing gig due to his disconnection with the comedy subject matter but his protégé Tonnio Valerii does more than enough to fill in his shoes. Valerii was of course Leone's second unit director on his classics and even made a handful of good and extremely underrated spaghetti's with the likes of Day of Anger, Taste of Killing, and A Reason to Live A Reason to Die (just to name a few) so he was more then qualified for the job.

The plot is essentially a coming of age story. We are introduced to an aging gunfighter Henry Fonda who is just wanting to retire. When he comes in contact with a fast draw goof ball named "Nobody" (who is introduced trying to club a fish!), he finds that Nobody is quite annoying as he starts following Fonda thinking his idol should go out with a firefight and not retire into obscurity. Nobody even goes so far as to set Fonda up with a fire fight with 150 gunmen! This sequence towards the end is one of genre's finest moments.

Leone may not direct, but this is a definite classic of the spaghetti western genre. The mixing of Fonda and Hill is near perfect and so is the formula of mixing a Leone epic with a comedy. People who don't even like the comedy western subgenre will still come out with a smile on their face. It's grand in scope, got two likeable leads that counterbalance each other, stylish directing, and another amazing score by Ennio Morricone that even has a little spoof element in itself. A definite must own for spaghetti western fans.

My Name is Nobody Trailer
Posted by Cronosmantas
Email ThisBlogThis!Share to TwitterShare to FacebookShare to Pinterest
Labels: Spaghetti Western, Western / War