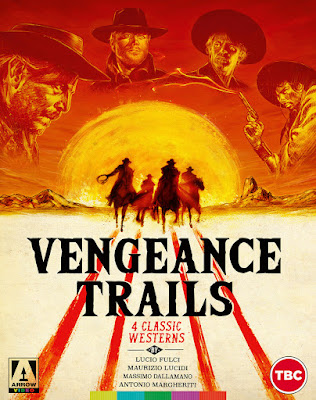 Although most of the films included have been released previously, it’s hard not to be extremely excited for Arrow Video’s recent release of Vengeance Trails. This four-film box set includes a fantastic set of films for any western aficionado from some of the biggest directors and stars of the time period. The new high-definition restorations are gorgeous, the extras are solid as expected, and the packaging is a delight to have on a collector’s shelf. This review is meant to cover the films included in the set - although any previous coverage we have run at Blood Brothers will be linked below, but if you’re a fan of those classic Italian gritty westerns, it’s hard not to recommend Vengeance Trails upfront.

For more information about the set, please see the details following the film reviews below. 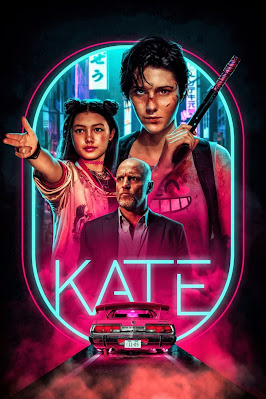 “Death is the time for beginnings.”

Maybe I’ve said this before in one of my previous reviews, but it’s worth noting again. At this point, it’s hard not to look at action cinema as Pre-John Wick and Post-John Wick. While the film in reference is in itself a love letter to the action cinema of the 80s, a vicious combination of the untouchable heroes of Hollywood and the brutal action excellence of Hong Kong heroic bloodshed, the combination and stylistic choices have proven to be wildly influential since its release.

Mid-tier action films, where this style lives, has been mostly relegated to streaming services and Netflix, in all of its domineering power, has delivered one of the best post-John Wick flicks. Kate rampages about in rapid-fire pacing, gorging on the Black Rain influenced style of a neon-soaked Tokyo night and immersing a classic yakuza war story with brash modern characters and enough action sequences to make John Woo jealous. Kate is a film built on the shoulders of giants, but it’s incredibly well-executed style, action, and pacing make it one of the best bullet-riddled pieces of genre cinema of 2021. 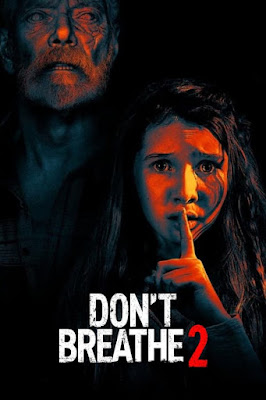 Ten times out of ten, I’m the kind of person that will defend a franchise. There’s a reason that Blood Brothers is the mothership of the No Franchise Fatigue Movie Podcast and I’m one of the co-hosts of it. I am not the one to ever say that a sequel (or any other additional entry to a franchise) ruins the original. No one says Halloween (1978) is a worse film for the fact that Halloween 6 exists. With that being said, boy howdy, do I find Don’t Breathe 2 to be a wholly perplexing sequel that takes bold (and confusing) swings with its premise and rarely connects despite some solid execution on a visual and atmospheric standpoint. Don’t Breathe 2 is tonally more exploitative than its predecessor and yet the film feels the need to over-explain itself.

Read more »
Posted by DarkReif at 4:24 PM No comments: 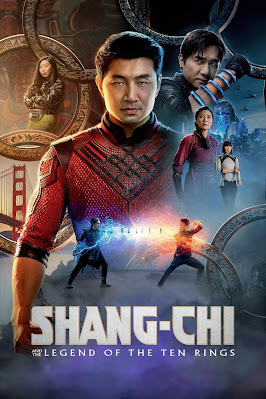 As a fan of martial arts cinema since I was, oh I don’t know, born, the recent obsession with the genre has been a roller coaster ride for me. A large part of me never expected that Hollywood or the American TV market would embrace the genre as it has in the last half of a decade. Whether it is shows like Warrior and the reimagined Kung Fu or Hollywood blockbusters like Snake Eyes and Raya and the Last Dragon, this latest boom is a welcome change of pace and to see mainstream audiences cheer for and consume one of my favorite and oft-maligned styles of filmmaking couldn’t make me happier.

It’s not that cinematic martial arts on the screen doesn’t go in waves, it does. Anyone old enough to remember will note that it usually pops up every 20 years or so, with the last pop coming in the late 90s and early 00s with the arrival of Jackie Chan, Jet Li, and The Matrix (fight choreographer Yuen Woo Ping) in Hollywood. What makes this latest boom so fascinating is the arrival of the latest Marvel film, their 25th of the MCU if I’m counting properly, Shang-Chi and the Legend of the Ten Rings.

Not only is Shang-Chi a film that attempts to bring the newest kung fu craze to the world’s biggest franchise, but it’s one that sincerely wants to adapt - and sell, this is Disney after all - Chinese martial arts, culture, and their cinematic history to a wider western audience. It’s a film that often tries to rectify so many of the mistakes made by the original Shang-Chi comic, a cringe-worthy series at best, and thrust its audience into a mystical world of Chinese lore (made up or adapting popular elements) while retaining that now formulaic Marvel brand. The combination is thrilling, fun, dynamic, and most importantly heartfelt. I might be biased thanks to my love of kung fu cinema, but this is easily the best Marvel film to date. 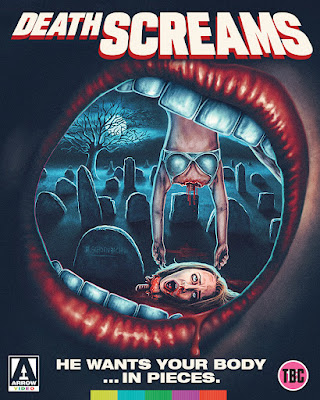 As the boutique label wars continue to happen within the realms of genre cinema, more and more fans clamor for the next “long lost classic” from the slasher genre. Whether it’s Vinegar Syndrome, Severin, 88 Films, or Arrow Video, the labels are all happy to dig into the deep, dark caverns of horror to unearth what could possibly be the next classic. These forgotten films occasionally do reach that echelon, but more often than not, it’s a stretch. Don’t misunderstand me, I’m happy these labels are rescuing films from oblivion, but after watching Death Screams last night - just know that it can be a chore to get through some of them.

Arrow Video’s track record has usually been fantastic in finding those lost classics. They’ve unleashed The Mutilator and Blood Rage. As of late, the label has been scraping some questionable pieces of cinema though and a handful of their latest stuff (sans The Slayer which is a film that I weirdly liked when no one else did) and Death Screams can be added to that list. Although this 1982 slasher has its moments, it’s a relatively meandering slog to work through and the overall story and characters are undercooked in a way that’s not nearly as fun as it might have been with more gimmicks or charisma.

The Snake Girl and the Silver-Haired Witch (1968) 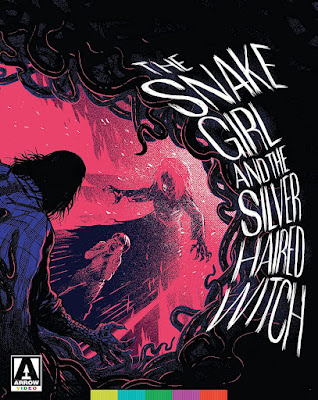 With most of his career dedicated to shepherding the Gamera franchise throughout its original run in the 1960s, 70s, and (unfortunately) 80s, it was a pleasant surprise that Arrow Video grabbed one of the few ‘other’ films that Noriaki Yuasa directed. Released the same year as Gamera Vs Viras (see my review for that film HERE), The Snake Girl and the Silver-Haired Witch is one of his best efforts.

For a film that regularly feeds off of the same child-focused themes that he embedded throughout the Gamera franchise, he utilizes a fantastical horror story to sell thematic morals and he does so with an admirably odd and offbeat manner. There’s a child-like whimsy to much of its approach, but the balance of its silliness, creepiness, and heartfelt moments make it a refreshing watch that feels far more impassioned than his later Gamera entries. 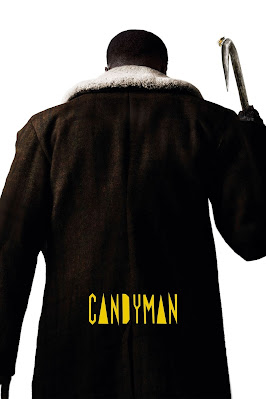 The original Candyman was a seminal part of my childhood and my growth as a horror fan. It was a staple of our weekly video store rentals as a family and watching it as an 8-year-old certainly elevated my love of horror. It’s a film that makes it into my rotation on a yearly basis and one that I still uphold as one of the iconic horror films to push the genre forward, particularly in 1992. The first set of sequels, however, sincerely fail to recapture so much of the original’s brilliance, although each one certainly tries to embed their stories with their own take on social commentary. They just lose a substantial amount of the themes and storytelling as they move further into generic slasher territory.

The latest sequel, Candyman, following the titling scheme of the 2018 Halloween sequel, ignores Candyman 2 and 3 (Farewell to the Flesh and Day of the Dead respectively) to go back to what made the original one such an iconic horror film. The film is intentionally engrossed with taking the Candyman lore, expanding it, and deepening its engagement with the racial and social commentaries from the original and pushing them into a new century. It’s also a film that doubles down on the horror elements, moving further from the inherent sadness and gothic romance of its predecessor, and kicking the supernatural slasher elements to the forefront. The combination proves impressively buzzworthy, carrying quite the sting, and providing an instant classic that brings the mythological ghostly legend to the modern age.

Read more »
Posted by DarkReif at 9:30 PM No comments: