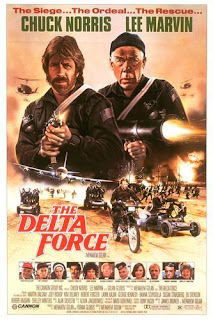 The Delta Force was definitely a big scale action film for Cannon Films as it had a very large budget compared to other Cannon productions and company's co-owner Menahem Golan even took it upon himself to direct, a feat he hadn't done since Enter the Ninja. Cannon even went to the trouble of casting old gruff-n-tough actor Lee Marvin to costar next to their own action star Chuck Norris. The result is an entertaining, if maybe a little too big in scope cheesy action-fest.

During Carter's presidency, some terrorists hijacked and American airline and kept the people hostage for almost a month. The whole situation was handled very poorly and the hostages only got released when Ronald Reagan was about to take office. The Delta Force is a direct result of this situation and it seems to be the gung-ho fantasy element on how Americans wish it was handled. Basically we have a group of middle eastern terrorists take over an American airline and The Delta Force is called in (headed by Chuck Norris and Lee Marvin) to go in to rescue them.

The cast of this picture is fantastic! Not only do we get Marvin and Norris in the lead roles, but we also get George Kennedy as a Priest and Robert Forester as our lead terrorists! Who knew he could play middle eastern so well! Oh and I forgot to mention Steve fuckin' James! Any film with his presence has to have at least the hint of likability. We also get a many great action sequences aided by a really catchy score by Alan Silvestri.

A few aspects of the film don't gel well with its cheesy action exterior. In the midst of the cheesy action sequences there are some deadly serious moments that seem at odds with the cheesiness. One sequence has our terrorists calling up all the Jewish passengers in a very dramatic moment yet not long after we have Norris riding around on a motorcycle with fucking missiles! I just didn't find the cheesball action and serious dramatic moments mixed well. The running time is over two hours long which is far too long for this type of film. The movie did drag at some movements and it could have easily been fixed with a little snipping with good editing.

Overall Delta Force is a classic of the B-action genre and it is definitely one of the strongest action films to come out of Cannon's plethora of films they released in the 80's and early 90's. Delta Force was successful at the box office so it did pave the way for some sequels, but the first sequel didn't arrive until four years later!

The Delta Force Trailer
Posted by Cronosmantas at 8:41 PM