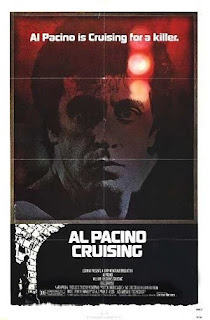 When someone looks at Cruising on my DVD shelf and asks what it is I just politely say "just an Al Pacino film" as explaining the story behind it would be no good. People just don't get it. Cruising however is one of the most controversial films ever made in America and was picketed by homosexual groups for the film being anti-gay. The controversy and for the fact that the film is directed by William Friedkin, one of my all time favorite directors, got me to buy the film finally after years and years of it falling into obscurity. All I can say is I can easily see why the film was controversial...

The plot is actually rather simple but in typical Friedkin fashion he makes it rather complicated with all of his underlying meanings and symbolism. We have a killer in New York killing off men in the underground gay community. Al Pacino is a cop that goes undercover into the homosexual underground to catch the killer in the mean time trying not losing his own identity.

The film is controversial as Friedkin goes to great lengths to show graphic sex sequences (a fisting sequence actually makes me cringe away from the screen as it was little graphic). Friedkin proved with The Exorcist that he likes to push boundaries and he again does here with by being sexually explicit. The film is also controversial as Friedkin shows the nasty side of the homosexual underground complete with dirty sex bars and explicit descriptions of sexual acts. It's a dirty, bleak looking film giving the picture a really dungy feel about. I however feel Friedkin was not being anti-gay. There are films made about the nasty side of heterosexuality (Vice Squad for example) but they aren't near as controversial. Homosexuality was still not readily accepted at this time in 1980 and for the simple fact Friedkin made a film that took place in the dirty underground homosexual backdrop that I feel the film unfairly got blasted for being anti-gay.

The plot is however not the problem that i have with the film. The problem I have is Friedkin makes it overly complicated with a slow pace. Our killer, every time we see him, is a different actor. His appearance changes to match the victim before. I'm sure it is some symbolism Friedkin concocted up that there is a "killer in all of us" but it is just bizarre and just confuses audiences. Pacino's character is also rather uninteresting and I never really felt his character was struggling with his identity, even with Pacino's grand acting.

Cruising is just an interesting failure from William Friedkin and people seem just as confused by it today as they were when it was released in 1980. It is definitely one of my least favorite films from Friedkin (at least from his classic era of films) as the picture just seems unfocused as a hole, like Friedkin couldn't make up his mind to concentrate more on the backdrop setting of the film or the plot. Even with all its flaws I still recommend it to the curious.

Cruising Trailer
Posted by Cronosmantas at 9:09 AM