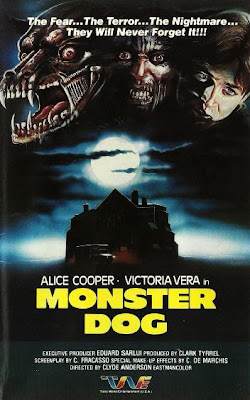 Monster Dog is one of those ultra bad films that I'm surprised isn't more popular with the cult crowd than it is. First of all it stars Alice fucking Cooper! Alice Cooper in a ultra shitty Italian horror film should be enough for anyone to see the damn thing! Second it is directed by Italian shit director Claudio Fragasso (under his Americanized pseudonym Clyde Anderson), the same guy that gave us the notoriously bad Troll 2.

Our film has Alice Cooper playing a rock star (that's a real fuckin' stretch!) and he, his girlfriend and band are heading to his hometown to record some music videos at his childhood home. After being warned by some cops of a killer pack of dogs on the loose, our group arrive at the house only to find the caretaker missing. While there Cooper tells his girlfriend about his family history in which his father was killed for being a monster dog...errr....werewolf. When murders start to pile up, the locals decide to take law into their own hands to try to kill Cooper before he too becomes a dreaded monster dog! I crack up every time I type "monster dog" as I always seem to get flashes of Ghostbusters when Bill Murray goes "soo... she's a dog!" Get it, Sigourney Weaver in the film turns into a "monster dog"... ah fuck it, never mind.

Everything about this film is absolutely horrendous. Production values... what production values! Our "monster dog" looks more like a Muppet than a threatening werewolf. Pacing... what pacing as the film just slugs along. The dubbing is eternally awful and Cooper doesn't even dub his own voice, even though he sings two songs on the soundtrack (two kick ass songs I might add). However the worst aspect of the film is the god damn score and it just grates on my nerves! After watching the film one has to wonder how the hell Alice Cooper got suckered into being in shit like this. Was he on a European tour and somehow met up with Fragasso and he somehow convinced Cooper to be in a movie as it "would be fun?"

Monster Dog is an eternally awful film. It is so bad that my father claims that the film police should confiscate every copy in order to be destroyed. It is so bad that it deserves to be discovered by a bad movie audience. Hey Troll 2 fans! It's due time for you guys to discover Clyde Anderson's back catalog of films! Who knows, perhaps one day Monster Dog will also earn the reputation as "Best Worst Film" ever... but I doubt it. Monster Dog is actually one of the few films I still own on VHS. Though I have transferred it to DVD-R by my own means, I still hold onto the VHS for one day I want to get Alice Cooper's autograph on it. I have a feeling the look on his face would be priceless!