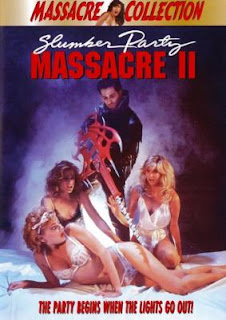 Slumber Party Massacre was a success at the box office so what does any successful slasher deserve? A sequel of course! If it's successful enough a franchise might even bloom, which Slumber Party Massacre did. I remember seeing the trailer to this sequel thinking they really took the concept over-the-top. Sure the original had some black humor but a guy who looks like Andrew Dice Clay using a guitar with a drill on the end? It's like an 80's nightmare with hair metal, slashers and shitty comedians all rolled into one!

Apparently the young annoying bitchy girl from the original that survived has grown up into a innocent virginally teenager in the form of Crystal Bernard. The events of the first film really affected her and she seems to be having deranged dreams of a killer holding a guitar fixed with a giant drill bit on the end. Yeah, I would say she has problems! She's in a band that plays annoying 80's pop rock and her and her band decide to take a vacation at one of their parents summer homes. While there her odd visions start becoming reality as our guitar killer finally, after a long wait, comes into the "real" world and starts killing off our band members one by one.

This is really bizarre, goofy sequel and it makes me wonder what the writers and directors were smoking. Our Courtney Bates character not only has visions of a guitar driller killer, but also bizarre visions of bloody hands in sandwiches and even giant monstrous zits (yes, that sequence takes the cake of the biggest WTF moment).

Sadly I didn't find this sequel half as fun or over-the-top the trailer made it out to be. The pace is slow moving even for a film that only clocks in at 77 minutes. It just takes too long for our outrageous killer to make an appearance. I also had a hard time believing Crystal Bernard was playing the same character as that bitchy little girl in the original. They seem like two totally different characters! Fans also looking for female flesh will also find this film really lacking in the department, especially compared to the original.

For a trashy slasher, sequel this has its moments but overall it's pretty bad. I have to admit it is interesting to see an Andrew Dice Clay inspired killer with a guitar drill on screen (I really wish I knew where that guitar prop is as I would love to have it!). The film is worth a view or two for fans of this trashy type of horror movies.