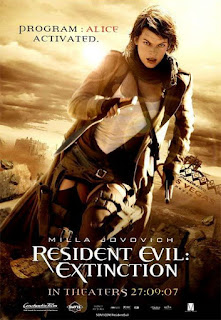 With the, let's say it nicely, poor execution with Apocalypse, the second film in the Resident Evil film franchise, low expectations were abound for the third and supposedly final (which we all know now to be bullshit) entry. Resident Evil: Extinction actually surpasses these expectations in many fun and odd ways creating a film that, I won't pull the wool over your eyes, is still bad, but far more enjoyable than the last film. Enough so, that even years later it holds its own as a unique and rather enjoyable experience that blends old school approaches with a modern spin.


Alice is still on the run from Umbrella and after getting out of Raccoon City has spent a majority of years wandering a now post apocalyptic North America in search of survivors, food, water, gas, and ammo. Her new genetic powers have grown into a telekinetic force and when she meets up with a few old friends, mainly Olivera from Raccoon City now attached to a survivor convoy led by Claire Redfield, she joins forces and decides to head to Alaska where there is supposedly a place with no infection. With a shit load of zombies and Umbrella on their trail, they have more than just the nature of a post apocalyptic world to hinder their lives.

Extinction  is basically Road Warrior meets Resident Evil. With its desert like landscape, its survival feeling, and convoy concept, this film definitely smacks of those classic cheesy 80s end of the world flicks. Granted, it's a far superior step above its previous film which hinted at an apocalyptic landscape, but this one still seems to run the cliche's far too often to feel truly fresh. Friends get bit but don't tell anyone, Umbrella (in other film's its usually the government) is out for their own ideas and ways to benefit from this, and the collapse of the convoy is pretty standard stuff. The film might be an over the top fun time, but it rarely treads new ground.

Although director Mulcahy has far more sense at his job than the previous guy, he still never is able to over come many of the script errors and loopholes. This film disregards many details of the first two films for the benefit of plot movement but, whatever. I expect no less in terms of crappy writing from Anderson. So the fact that it is even semi-coherent is a win. Not to mention, it occasionally focuses on character growth rather than just padding everything with action. Movement in the right direction.

The film does have its moments. A fairly cool opening sequence that mimics the original film and a pretty stellar infected crow attack sequence both bring the film above expectations too. Director Mulcahy also loves to use as much practical effects as possible which makes the monster-rific finale with a Tyrant like creature from the games feel more effective. He doesn't use a lot of quick edits or shaky cam to cover his lack of action coverage and it's moments like these that make the film so much fun to watch even through all the cliche scenes and poor scripting.

Extinction may not be good, but its not near as bad as Apocalypse either. At least this one has moments and generally succeeds at being a fun watch more or less. Still not the film one is looking for Resident Evil to be on the big screen but its moving in the right direction.

Written By Matt Reifschneider
Posted by DarkReif at 5:15 PM