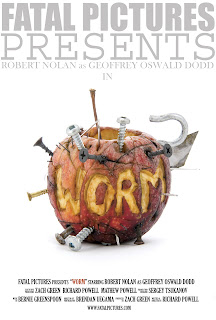 Taking a hint from the modern classic “American Psycho”, this little independent film “Worm”, brought to my attention by the film’s producer Zach Green, seems to be tapping on a few unseen elements of the Thriller and Horror genre. Although only a short film that gets the audience digging into the atmosphere and style before ending, it effectively uses its time wisely to build itself nicely before its rather abrupt and tension relieving end and sparks a few ideas to where this film could go and stirs some attention towards those involved.
Geoffrey Dodd is your average teacher to the disenfranchised youth of today. Despite his efforts and attempts to spur intelligence and fire within his class, the mundane life of teaching and the irritability of his own life are beginning to come out in odd ways. His obsession with a student, his anger towards the circumstances of his life compared to the rather spoiled lives of his students, and the sheer annoyance of his coworkers are manifesting his some abnormal ways.
Although done independently (very independently might I add), the effectiveness of “Worm” is actually rather potent as we casually fall under the hypnotic decent of Geoffrey Dodd through the mundane elements of his life into a separate world of consuming darkness. This is done with some rather clever use of close ups and some solid non-verbal acting from our lead, and a well-spurred and increasingly absurd and violent inner monologue that is spliced over the film. With these three elements, this 20-minute ride into some serious issues from this character is an intense, tense, and fun ride (if you consider the collapse into madness fun, I suppose) for the audience done with some rough on the edges but promising talent. It flows damn well and quickly so that by the end, I was like “What?! It’s over?!”, which is more than a compliment for the filmmakers.
The ending was rather abrupt I might add. Although this happens to be a good thing. It was a nice relief of tension towards the coming climax that I was dreading (and perhaps curious to the results of) that the short film was obviously building towards. The ending may have had me upset to not know some of the answers I had questions towards, but that shows the effectiveness of what was in the film and its reaction in its audience. May not have been the ending I wanted to see, but it was fitting too.
“Worm” may not be the slasher or over the top odd indie Horror flick that many people come to expect these days, but its appropriate use of atmosphere and great pacing in the writing (matched with some surprisingly solid acting) overcomes many of its confines creating a great little film experience that I fully recommend. Looking forward to seeing if anything comes of the film’s makers seeing as there is quite a bit of potential lying in the depths of this film.