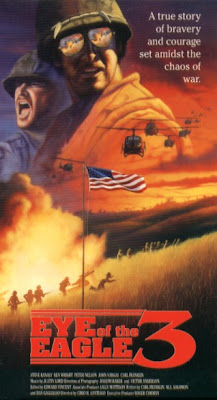 Pulse may be the trilogy that no one asked for but Eye of the Eagle is the trilogy no one knows about. It just floors me that they actually made three of these damn things especially since no one seems to know they exist! With Eye of the Eagle III we have director Cirio H. Santiago stepping back into the director's chair as he only served as producer on the second film. This could be either a good or bad thing as the first film in the series that he directed was pretty dreadful. Well all I can say is it at least came out better than that outing...

Our film opens with a platoon in Vietnam sabotaging a Vietnam train. The platoon is then sent to a deserted camp at Lang Mei where they are given orders to hold the hill. In the mean time their commanding officer is taken into custody for murder so the military send out a new captain that is completely green and knows nothing about being in actual combat. Can our original commander break out of prison in time to help his troops defeat the oncoming North Vietnam force? By the time it happens will anyone be awake?

Thanks to the films plot, the action and events are confined to basically one set. Since the film has poorly developed characters that don't hold our interest, the setting becomes boring really fast. Who knew a film with so many bullets fired could be so damn boring?

The acting is definitely better compared to the first film and thank God Santiago did away with that jagged jump cutting before stunts! Still the film is just yawn educing and completely forgettable. The film also has NO plot or character connection to either of the previous two Eye of the Eagle films. Like the second film it seems to be only retitled to be part of the "franchise" as it is another cheaply made Philippine Vietnam War film.

If you have to see one of these damn films then make it Eye of the Eagle II as that film was surprisingly decent. I recommend leaving Eye of the Eagle III alone on the video store shelf and picking up Braddock: Missing in Action III to rent instead.

Bonus Rant: Our Native American soldier in the film has a weird hallucination where he sees himself all painted blue and completely made up in a Native American headdress. This is a "what the fuck" moment and completely ruins a serious scene. I'm not sure what the point of the scene was but it definitely took me out of the "plot", or woke me up, take your pick.

Written By Eric Reifschneider
Posted by Cronosmantas at 4:09 PM