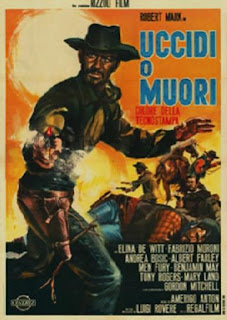 Italian director Tanio Boccia is best known for his entries into the Peplum genre directing such films as Caesar the Conqueror and Triumph of Maciste, but he made more than one attempt directing films in the spaghetti western genre in his career. Of the films he directed Kill or Be Killed is one of the more forgettable entries. Not because it's bad but because it's so damn mediocre.

We have a fiddle playing gunmen that drifts into a remote town only to piss off some psychotic sons of a local patriarch. While defending a beautiful woman and her family from the psychos, he kills them all. Their father hires an assassin but that plan falls flat. He then sends his oldest son to get vengeance and he devises a plan of killing the sheriffs deputies, pinning their deaths on our hero and then burying our hero up to his neck in the desert. People who have seen lots of westerns know that this technique never works as our hero is discovered, nursed back to health just in time to go kill the bastard that put him in the ground before he marries his women.

Kill or Be Killed isn't a bad spaghetti western but that is where lies the problem. It's so mediocre that it just fails to stay with you. The directing is adequate, the script is adequate, the acting is adequate but nothing is great resulting in another spaghetti western forgotten in the pile. Our filmmakers try to make the film stand out by having our hero play a fiddle but it's a feeble attempt at best. I do have to commend an interesting bar fight though where we have our hero punch guys while having his fists inside of beer glasses.

Written By Eric Reifschneider
Posted by Cronosmantas at 7:25 PM