Invisible: The Chronicles Of Benjamin Knight - 1.5/5 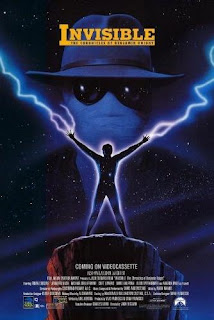 The end credits to Mandroid promised us a sequel entitled "Invisible: The Chronicles of Benjamin Knight" and without that promise nobody would ever know this was a sequel to Mandroid from its long title and promotional artwork. It just looks like a Full Moon cheapy knock-off of The Invisible Man, which it is to an extent, but it's also just Mandroid 2 in disguise.

Our film picks up right after Mandroid with one of our characters wheelchair bound controlling the metal mongoloid, one character getting out of the hospital after being rendered Invisible, and the other just as eye candy, showing off her ass crack when she's having pity sex with the guy in the wheel chair. Our villain from the first feature Drago is back but he is mostly in the background commanding his homeless minions while the Russian military take center stage to gain our scientists secrets.

Right away one can see that this film has even lower production values than Mandroid but it is a little less talky with a few more action scenes. The acting is again decent for redundant science fiction drivel. The plot again is just a mish mash of other more popular science fiction films and none of the concepts are fully developed. Half the film is about Mandroid and the other half is about Benjamin Knight being invisible. Yes, the guy referenced in the title. The Benjamin Knight character is still only written out to be a secondary character so it is amazing that his name gets into the title. If you're going to call a film "The Chronicles of Blah Blah", you better make sure that "blah blah" is the fucking main character! Can you imagine if The Chronicles of Riddick follow a different character other than Riddick? Also the "invisible" effects are nothing better then what was utilized 60 years before in Universal's classic version.

The unfocused, redundant plot is my main beef with the film. My main beef has to be with the villain Drago. First of all his make-up job must have been the first thing to get axed with a lower budget as his make-up looks even shitter than the last picture. However this again isn't my main problem. The part that gets to me is that he really has no point to the plot. His character takes back stage during the film and spends his time not trying to foil our scientists plans, but having his army of homeless followers kidnap pretty girls to make them dance for entertainment and then raping them. What kind of comic book inspired villain is this? His character is so poorly written that they would have been better off leaving his character out and having our scientists battle the Russian military instead.

Nobody asked for a sequel to Mandroid and after watching Invisible: Yadda Yadda Yadda it proves that Mandroid didn't need one. It's as lifeless as it's metal drone star and a definite low point in the classic era of full moon productions.

Bonus Rant: Since the end credits to Mandroid promised us this sequel, one could be safe to assume the films were filmed back-to-back. I did find it odd that the character Zanna was played by Jane Caldwell in the original and Jennifer Nash in Invisible. I have nothing against either actress as they are both decent and beautiful but one would think that if you're planning a make a sequel right away, wouldn't yet get the actress in the first film to sign an agreement to appear in the sequel? Maybe it's just me.

Invisible: The Chronicles of Benjamin Knight Trailer
Posted by Cronosmantas at 10:27 AM