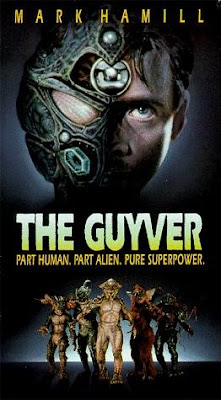 I first became interested in Guyver when I learned that it was produced by cult icon Brian Yuzna (producer of Re-Animator), co-directed by special effects magician Screaming Mad George (Re-Aninator sequels) and starring cult actors David Gale and Jeffrey Combs (both of Re-Aniamtor). You also might notice that it stars has-been A-list actor Mark Hamill who is no doubt doing this weird genre film for a quick paycheck. All these interesting cult filmmakers and actors doing a live-action, monster filled adaption of a popular Japanese manga comic has to make it at least worth a watch... right? Well it is worth a watch but that's about it.

I was not familiar with the manga comics before viewing this film so all I have to say that the plot is way fucking out there! The film opens with a long back-story of how the human race was created by aliens and some humans are granted to the ability to shape shift into "monsters". An evil corporation of these shape shifters called Chronos is trying to figure out how to use a "guyver", an organic suit of armor. After all that back-story given in a standard Star Wars (you didn't think I would write a reveiew on a film starring Mark Hamill and not make a Star Wars reference... did you?) scroll on the screen, we are then introduced to a scientist who gets killed trying to get the guyver unit to the CIA. The guyver unit ends up in the hands of a young man who accidentally gets the shield unit entered into his system. Now he must use his new biological armor to save his women from all the monsters sent to capture her in order to find the guyver unit. I forgot to mention Mark Hamill is a CIA agent who meanders around pointlessly.

Guyver is defiantly a film not to take seriously. The acting is hammy and over-the-the top the plot is ridiculous. However what better way to handle silly material like this? The directing is also full of energy moving the film along at a nice pace with some wacky wipe transitions. The highlight of the film however is the monster effects which are surprisingly really good for such a low budget.

The film however falls prey to too many cliche's and very dumb comedy moments (the rap music portion made me hit my forehead). The monster fight sequences are also a little too reminiscent of Power Rangers for my taste. Actually, the more I think about it, this is just a more violent, adult orientated Power Rangers variation.

Guyver is a silly, ridiculous film and die-hard fans of the manga no doubt will hate the silly approach to the subject matter. Then again I beg how can anyone take a plot like this seriously? They tried in the sequel Guyver: Dark Hero and it came out even worse. It kept my attention but I wish the filmmakers added a little more over-the-top violence to the film. This is from the makers of Re-Animator for Christ sake, where's the blood?! Even with the violence it does have, it's still a little too childish for me to truly like but I did enjoy the cast, especially David Gale in another wonderful over-the-top role! Fans of silly, comic book material and B-movies might have a fun time

Bonus Rant: The promotional artwork for the film made it look like Mark Hamill played the title character of the Guyver. Shit.... I'm sure his "fans" were disappointed that he played another throw-away role, a typical forgettable character he was degraded to playing after Return of the Jedi.