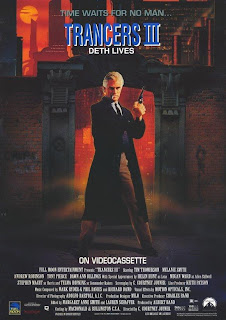 The Trancers saga continues with this solid sequel that has the series take a darker tone without loosing that same tongue-in-cheek edge. The mixture worked making this by far the best sequel into the entire franchise, and that's even without original director Charles Band behind the camera.

In 1992, Jack Deth and Leena's relationship is on the rocks as Deth makes a living as a private investigator who basically just spies on cheating spouses. Deth, while on the way to mend fences with his wife, gets kidnapped by a ridiculous looking robot sent form the future. While back in the year 2325, his superiors make him aware that a newer, stronger breed of Trancers are whipping the humans out so he is sent back the year 2005 when the stronger Trancer program began by psychotic villain Col. Daddy Muthuh (Andrew Robinson, having a heyday by hamming up his performance). So now it's up to Deth, and his sidekick Shark (the ridiculous looking cyborg) to take these stronger breed of Trancers out! Are they too strong for Deth? Oh fuck no!

The film sadly doesn't have all the actors from the previous films return but they wrote the plot so we wouldn't need them. Somehow Band still convinced Helen Hunt to come back to make a small reprisal despite her hitting the big time with her television show Mad About You. Even though her role in this sequel is small, it's still great to see her back.

I really dug the new dark approach to the subject matter and I was also pleased they still were able to keep some of the tongue-in-cheek humor with Deth, sporting a new crew cut, still wonderfully spouting off some great one-liners. I also really liked the addition of the android sidekick "Shark" despite its appearance looking completely idiotic.

I was completely surprised by Trancers III and for a direct-to-video low budget B-movie, this was pretty decent. I highly recommend this to fans of the franchise though some may not like the dark approach. I dug it and to me it felt more like the original film as Trancers II did get a little too unintentionally funny and wacky at some moments.