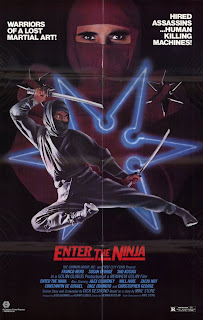 Remember the 80's ninja craze? If you're a fan of 80's action then no doubt you are aware of the movement as there were what seems like hundreds of cheesy ninja films made from all over the world. This wonderful B-movie movement can be pin-pointed to one film, Cannon's 1981 release of Enter the Ninja.

This early Cannon production (no doubt referencing it's title to the Bruce Lee classic Enter the Dragon) stars unlikely Italian actor Franco Nero as a Westerner mastering the art of Nijutsu. After passing the training, he heads down to the Philippines to visit an old war buddy that sent a urgent message. It appears some rich snobs are sending goons to threaten him and his wife to sell their land due to a wealth of oil beneath it. Nero roughs them up so the goons get deadly and it becomes an all out ninja war between Nero and rival ninja Sho Kosugi.

This film is cheesy to the highest extent really making a mockery of the ninja legend. It just makes it that much more fun! All the ninja clichés that would become popular in pop culture are used to the fullest here - ninja stars to the head, smoke bomb, etc.

I remember when I first saw this film thinking "who the hell is this Franco Nero?". Far be it from me to realize he was one of Italy's biggest stars and I would later on own numerous of his classic Italian films. Even though I have learned to love Franco Nero as an actor, I still find it odd that he was casted in a role as an "American ninja" considering he was an Italian man pushing 40 that had NO training in martial arts. Still he does will with the B-movie material and I'm glad to see him in any film, even if his voice is badly dubbed.

Christopher George portrays the films lead villain and he does it way over-the-top. I had a hoot with his over-acting and he always brings a smile to me in all these cult films he appeared in the early 80's. (SPOILER: His death sequence was especially silly and he seems to look and the camera and shrug with a smirk on his face. END SPOILER). Sho Kosugi also makes his major film role debut as our evil ninja and Kosugi would make a career out of playing ninjas in numerous cheesy 80's action films, including two sequels to Enter the Ninja.

I went into this film expecting a cheesy B-action film so I can't too picky but Menahem Golan's direction is rather flat. I appreciate all the films he produced under the Cannon logo but he really needs to stick to producing as he just doesn't have a real flair behind the camera. His lackluster style and poor editing make the film drag in a few bits. I also didn't appreciate the short sequence where Franco Nero beds his best friends wife (cult icon Susan George). What kind of hero is this? He's a master of ninjustsu so he is highly disciplined yet he still fucks his best friend's girl!? That's just LOW!

If you're a fan of cheesy 80's action movies then Enter the Ninja is a must. It not only paved the way to a slew of cheesy Ninja movies to follow but it also marked one of the first entries into Cannon's foray into the cheesy action realm. Things would only get more outrageous and more entertaining in Cannon's two sequels: Revenge of the Ninja and Ninja III: The Domination.

For some damn reason MGM has NOT released Enter the Ninja on DVD despite releasing the films sequel Revenge of the Ninja. It just burns my bacon that I own Revenge on DVD and I'm still resorted to watching my old, wore-out VHS of Enter. It even makes me more mad that Enter is shown on MGM's HD channel in remastered glorious widescreen. Come on guys! Take that wonderful transfer, slap it on a disc and release it to us fans! Please take some time and sign my petition to get this film, as well as some other Cannon classics, to be released on DVD: http://www.petitiononline.com/cannon/petition.html

Enter the Ninja Trailer
Posted by Cronosmantas at 6:48 PM