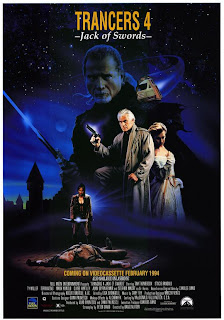 The ending to Trancers III got me pumped up for another sequel. Jack Deth and his sidekick android Shark time hopping around singeing Trancers sounded like an awesome way to lay out some more sequels. However Full Moon changes their mind yet again and takes the series in a new direction, a direction that could have been interesting if executed properly. Sadly, mostly thanks to a zero budget, the film fails at its new concept of throwing Jack Deth into an alternate medieval Trancer universe.

Deth, still singeing Trancers and other monster scum through time, this time gets a new hot, hard ass female boss. After butting heads Jack then heads back to work but thanks to a hidden monster in his time machine, he gets catapulted to an alternate medieval dimension that, of all things, also has Trancers! So Deth with the help of some human rebels and a rogue Trancer (son of Caliban, leader of the tracer cult), decide to rise up and do what Deth does best, singe some Trancer ass!

The trancers here are a little different here (though a good definition of them is never given in the previous films) as they are more vampire like. They suck on their victim's necks, turning them different colors until they just vaporize. It's really cheesy and I wouldn't even call these bastards Trancers as they really seem to have no psychic abilities or turn yellow and zombie-like. They just seem to be extremely strong, aristocratic, asshole vampires.

I do like the concept of throwing Deth into a medieval setting but the film is very poorly executed. The worst aspect is the production values which are extremely low even compared to the previous films. The second problem is the plot set up as the plot is broken up into two separate films. Yes this and Trancers 5 were filmed back to back so the film ends on a very abrupt note. This also means that we are also graced with a extremely short running time and a extremely long, boring title sequence to pad the clock. The acting is also beyond terrible especially with bad actors spouting off badly written medieval dialogue with "thee" and "thou".

You know what pisses me off the most though? How they did away with the android Shark. Shark was set up in the previous film like he was going to be returning badass character in sequels to come but right away we are told that he was destroyed in a mission (his head is even used as a lamp at Deth's home). Thanks a lot for ruining that concept Full Moon!

Tim Thomerson still makes this disappointing sequel worth watching thanks to his tongue-in-cheek one-liners. Fans will definitely find something to like. Stay tuned for Trancers 5... if you actually care to see the tie-up that much.