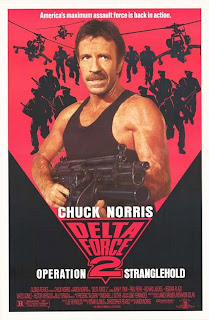 Four long years after their hit The Delta Force, Cannon films finally got off their lazy asses and made a sequel. Sure it's far lower budget but it still has the ability to entertain as much as any Chuck Norris actioneer can.

Here Scott McCoy has been promoted to colonel and his partner are assigned to bring in deadly drug lord Ramon Cota (Billy Drago) and thanks to a loop holes in the American legal system, he is set free. Pissed off he kills the wife and kid of Norris's partner so his partner sets out to take out Cota himself. Of course he gets killed in the process so Norris takes it up on himself to go into Columbia to take Cota out.

This sequel for one is not nearly as large in scope as the original. The original focused on our Delta Force as a group for the most part whereas this sequel seems to focus way more on Norris making it feel essentially like a one man army film. Even with a far lower budget director Aaron Norris (Chuck's brother) still crafts some entertaining action sequences. Sadly the film seems to be mostly known for a deadly helicopter accident that happened on set while being filmed in the Philippines which killed many of the cast and crew members.

Even though the film is a lot smaller in scope, the filmmakers again load the film up with strong secondary actors with the likes of John P. Ryan as Norris's boss and of course Billy Drago as Romon Cota. Drago really shines here. He plays the same typical bizarre, sadistic villain that he usually does but he does it so damn perfectly that one can't knock him. He's terrific!

It's not as good as The Delta Force and the film does have quite a different feel to it, but it's still a solid Chuck Norris action outing. I don't see any reason why fans of Cannon or Norris wouldn't have some fun with this.