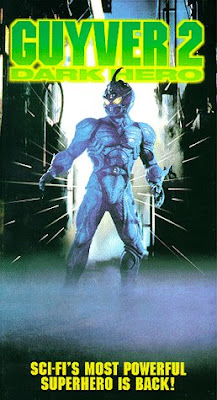 I was extremely underwhelmed by the first Guyver so I wasn't really gung-ho to go right into viewing Guyver: Dark Hero (or The Guyver 2, as it reads on the DVD box artwork). Still my addiction for sequels drove me to power through it so I poured myself a drink, put up my feet in order to get prepared for another mind numbingly silly fighting monster film.

After the opening fight sequence, I noticed something a little different. First of all it was BLOODY! Did my eyes deceive me? I picked up my DVD box and noticed the film was rated R. The original was PG-13 and lacked the blood I was craving so this was a good sign. I mean how many franchises turn to an R rating? Most, including Mad Max, RoboCop and Die Hard degrade to a PG-13 but not Guyver bitches! The film also seemed to have been taken more seriously so I was actually thinking this was going to be a better film than the first. Well....

Taking place right after the first film, our Guyver suited "superhero" starts having dreams of odd shapes. He then gets news of a spacecraft has been found so he befriends a scientist to let him in. It seems the spacecraft belongs to the alien beings that originally created the human race. The evil Chronos corporation also becomes interested in the spaceship and send many of their monster morphing humans to get their hands on another Guyver unit. Lots of bad dialogue and hokey fights ensue.

Apparently fans prefer this film as it follows the source material (the manga comics) more closely. I don't read the comics so that aspect has no bearing on me. To be honest I preferred the first film as it was more tongue-in-cheek. Director James Wang (co-director of the original) takes this sequel more seriously but I'm sorry, I can't take this silly concept seriously. The original had bad dialogue, but the tongue-in-cheek nature of the film made it easier to swallow. Now the extremely bad dialogue mixed with a more serious tone makes the film seem worse.

The fight sequences are poorly staged as usual and the whole film again reeks of a more bloody version of Power Rangers. The suits are decent again but that's not enough to make this reviewer to respect the film.

The R-rating got my hopes up for this sequel but I should have known better as too many cast and crew members of the original did not return. Gone was producer Brian Yuzna, gone was co-director/special effects magician Screaming Mad George, and gone was original Guyver star Jack Armstrong (replaced by David Hayter). Fans of the manga may like this film more but not this reviewer. Give me the more tongue-in-cheek original any day. Plus the original has Mark Hamill, and he alone makes any film better! Well no, but I think you get my drift...