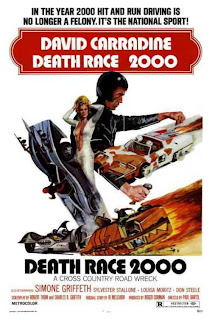 When it comes to cheesy Roger Corman productions and even B-movie releases of the 70's, one film always tops the list. That is of course Paul Bartel's cult classic Death Race 2000. Death Race seems to be as popular today with the cult crowd as it was back in 1975 and no doubt that can be attributed to its sardonic, humorous approach to a very violent, controversial concept.

The film's concept is simple. Death Race (based on the uber serious story The Racer) is about a deadly cross country race which our racers get points for killing pedestrians. What a sadistic concept! However Corman and Bartel knew the concept would be too controversial to take seriously so they decided, wisely, to take a humorous approach with the material. Our main character is a driver named Frankenstein, played by David Carridine. His character is a beat up mess, wearing a mask to cover all the injuries from previous races. This is of course is a facade as he looks completely normal behind the mask. It seems the French are rebelling against the violent race so they start setting up booby traps for our racers, killing them to make a point. Carradine figures out a plan that his extremely attractive navigator is a imposter sent in by the French to take him out. Will he beat the French at their own game to win the race or will he have a change of heart? Finding out is one of the best B-movie experiences I have ever had.

This film could have easily been taken deadly serious but what makes it so fun is it's tongue-in-cheek approach with plenty of political satire. The film is actually rather goofy and even resembles Looney Tunes at moments. An example of this is our French putting a detour sign in the middle of the road which of course fools a driver to drive through a fake tunnel that leads off a cliff. It gave me plenty of flashes of Wile E. Cyote and Road Runner along the way.

All our cars and drivers are extremely goofy also with each car having silly designs that resemble those strange hot wheel vehicles that look like animals and such. Carridine's car looks like a lizard with rubber teeth, Sylvester Stallone's car resembles a mobster car complete with Tommy guns and Mary Woronov's car resembles a bull. We even get one racer that drives a Nazi car and screams "Blitzkrieg" whenever she runs over a pedestrian! The goofiest concept hands down is the fact that Carradine has a fake hand that is a grenade.... literally a "hand grenade." The sequence with the most black humor is a scene where a geriatric hospital puts out some elderly into the roadway to get hit by Carradine but Carradine swerves to hit all the doctors and nurses instead. Black humor indeed!

Death Race 2000 is an extremely goofy film and will definitely not be for all tastes with its mixture of black humor and extreme violence. I personally had a ball with the film and it is definitely on my list of top B-movies of all time. The film was so popular that it inspired an insulting pseudo-sequel called Death Sport made 3 years later as well as a recent remake in 2008 with a drastically different tone.