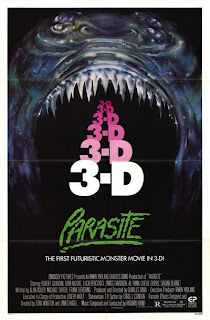 After viewing the 3D shitstorm that called itself "Metalstorm: The Destruction of Jared-Syn", I decided to revisit director Charles Band's earlier entry into the 3D science fiction craze with his 1982 release of Parasite, a film that proudly proclaimed itself to be the "first futuristic monster movie in 3-D" on all the advertisements. I remember the film being bad but after re-viewing the film after many years it wasn't near as bad as I remembered. To be honest I actually found it to be a rather ambitions film for such a low budget film, like some heart was put into it unlike that OTHER 3D Charles Band film!

Taking place in a post-apocalyptic future, the film opens with a somewhat oddly constructed sequence shot to be a like a dream on how a scientist became infected with a parasite he was working on. He then awakens and continues to drive an ambulance in the desert post nuke world. He's on the run from a well dressed mercenary that's driving a "futuristic" Delorian. Along the way he runs into a group of thugs that steal a container and unwittingly release a deadly parasite that starts making food of some of the members. Our scientists, with the help of a cutesy young Demi Moore, must defeat the merc and kill the parasite before he dies and the parasite reproduces, bringing on the end of the world!

Considering how low the budget was, Band surprisingly is able to make a believable post nuke world with great, on site locations in south California. He even gets some good performances from our cast who play the film seriously aiding in the films believability.

Of course in typical Charles Band fashion some cheesiness does seep into the film especially in the form of our merc who is on the tail of our scientist. A suited guy driving a Delorian waving a killer laser pen just comes off a little silly. The Demi Moore character also seems completely pointless other than to give a very flimsy love interest for our scientist. Stan Winston's (Jurassic Park, The Terminator) parasite effects are actually surprisingly average (also isn't the parasite "growl" here the same sound used for the vampire's "growl" in Tobe Hooper's Salem's Lot miniseries?).

Also since the film was made in 3-D, teh 2-D transfer for the home video market looks muddy and murky. Also as expected with films made in 3-D one can expect plenty of pointless scenes of things "comin' at ya" in the camera, the most memorable being a man stabbed with a pipe and the camera zooms in showing some blood beginning to flow out.

Overall I actually had a good time with Parasite and it helped wash the bad taste of Metalstorm out of my mouth. I unfairly gave a bash on Parasite in my Metalstorm review but upon reviewing the film I can honestly say it is much better then I remembered. For an early 80's low budget monster film you could do much much worse.