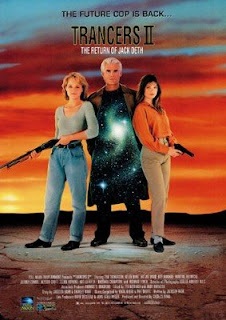 6 years after Charles Band's underground cult classic Trancers hit theaters, he finally delivers a highly anticipated sequel (to the low budget cult audience that is) only this time direct-to-video. In the time between Trancers and Trancers II, Band's company Empire Pictures went bankrupt and his new direct-to-video company Full Moon Entertainment took the reins of the franchise and though the sequel isn't as good, it's still great to see a character like Jack Deth back on the screen, even if it is only the small screen.

The plot takes place 6 years after the events of the first film with Deth and his girlfriend Leena (again played by Helen Hunt) still protecting the ancestor of our last remaining council member of the future from Trancer scum. No Trancers have been sighted for years until one day they suddenly pop up but thankfully Deth is there to foil their plans. It seems that Whistler's brother Wardo (Richard Lynch) has popped up in 1991 Los Angeles, running psycho wards in order to breed new Trancers. To make matters more complicated, Jack Deth's ex-wife, who died, was rescued before her death and sent down the line to spy on Wardo. We all can see a predicable love triangle happening here!

The best part of this sequel is that Band reunited almost all of the surviving characters of the original Trancers so it's a hoot to see them all together again and to see how they've changed over six years. Band also adds great cult actors Richard Lynch and Jeffrey Combs to the mix. Lynch is great in his token villain role but Combs is rather wasted and only seems to be thrown into the film to appease the cult film fanatics.

The main problem with the film is the budget constraints and it looks and feels far more low budget then even its shoe string original. The action sequences are very low grade, poorly shot and with lots of slow motion. The climax is also hardly anything to get excited about with low grade action antics. The low production values actually cause more unintentional laughter than anything.

Even with no budget, Tim Thomerson makes the film worth seeing alone as he again perfectly plays the lovable jackass Jack Deth like he was born for the role. His outrageous one liners always brings a smile to my face ("Damnit McNulty! Next time someone hands you an exploding ham, I'm gonna pass the mustard!"). This is definitely worth checking out for fans of the original.... others may not apply.

Bonus Rant: During one sequence the movie blatantly focuses on a movie trailer for Charles Band's Crash and Burn which is shown on a TV. It's one thing to be subtle about such nods to other films by having them on the screen in the back ground and such, but to actually break the plot flow in order to focus on the trailer is kind of sad. It's like Band was wanting people who were watching this film to go rent Crash and Burn right away. Nothing like hitting people in the head by shamelessly promoting your other material Band!