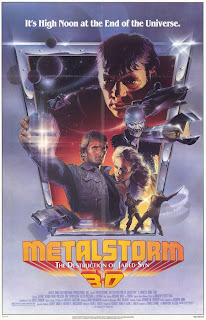 Metalstorm is another entry into the early 80's science fiction 3-D junk reminiscent of such films as Spacehunter: Adventures in the Forbidden Zone. Hell even the title adds a completely pointless subtitle like Spacehunter to make it ridiculously long (Personally I think they should have called it Metalstorm: Face the Slayer but I just then that's the Slayer fanatic in me).

The films incoherent plot is a combination of Star Wars and The Road Warrior, just made with no heart. We have a loner roaming the desert landscape on a remote planet in search for the Jared-Syn mentioned in the ridiculous subtitle. Apparently Jared-Syn (played by The Road Warrior's Michael Preston) has broken some contract or some bullshit like that and he and his roaming band of mutants and cyborgs are killing people to supply their souls to some crystal. Yes the plot is as silly as it sounds. Along the way our hero runs into a beautiful scientists (Kelly Preston) whose father was killed by Jared-Syn and with the help of Tim Thomerson (playing a thankless Han-Solo type role) and a race of Cyclops' (lead by Richard Moll) plans to destroy Jared-Syn once in for all making sure the subtitle doesn't lie!

Wow does this film not make any sense thanks to no fucking plot flow and poorly developed characters. Our hero is wooden and our villain is a card board cut-out. Our brooding love between our hero and Kelly Preston is just horrid. Not only is the acting bad but so are the stunts and effects. The effects are just bad make-up jobs and poor green screen shots. The Cyclops race is nothing more than actors having one eye covered up on their right hand side. Just pathetic. Considering this is part Road Warrior rip-off one would expect some good car chase sequences but the chases are poorly planned and choreographed making them rather boring.

I do have to give respect to Richard Band's catchy score as it did aid the film but sadly the score can't save the picture from being complete shit. It's interesting as Richard's scores are ALWAYS much better than his brother's films. The cast is also incredible with a bunch of seasoned, recognizable actors but thanks to the poor script and directing they come out completely forgettable.

For a film that has Cyclops', sand monsters and fucking Tim Thomerson, this should have been a lot more fun than it is! As is it's just a horrible science fiction hybrid of more popular films. This is even worse than Charles Band's previous 3-D science fiction film Parasite and that is a feat all in itself. The film's ending is left wide open for a sequel but I'm not shedding one fucking tear that Metalstorm II never got made. I wouldn't put it past Charles Band though as he seems to be very busy making sequels to long dead films and franchises. Call us lucky that Universal owns the rights to Metalstorm and not Charles Band!

Bonus Rant: What exactly does the title have to do with the film? No not the damn subtitle, the Metalstorm part. Sure it's a cool term and no doubt it was only called this because it was a cool term.