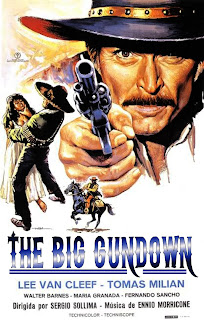 After Sergio Leone's grand epics, one film ranks higher than the rest and for my money The Big Gundown is the single best non-Leone spaghetti western. Yes that is a bold statement as the genre is littered with classics but I find this film to be just superbly made and with a lot of heart and it contains all the ingredients of a great spaghetti.

The film as an civil war vet (Lee Van Cleef - pre "Good, Bad and the Ugly") who has been lowered to life of bounty hunting, a job he happens to be extremely good at. A wealthy friend and colleague has just offered Cleef the opportunity of a lifetime if he will only track down and kill a Mexican-half breed named Cuchillo (Tomas Milian) who has supposedly raped and killed a young girl. Cuchillo proves to be smart, devious bastard that uses his smart mouth and wits to get out of all of Cleef's traps. The question is did Cuchillo really do the deed? The result ends in one of the best duels ever in spaghetti western history, especially since its between a knife and a gun!

Our two leads are perfectly cast and it's wonderful to see these two great actors on screen together for the one and only time in their careers. Cleef is tough as ever in his bounty hunter role and to be honest I would be scared shitless to have him tracking my ass down! Milian is wonderful in is smartass Mexican half-breed role and he was so good that he ended up making a career out of such characters playing similar roles in such classics as Tepepa, Companeros, and Django Kill. You couldn't ask for a better cast.

Sergio Sollima's direction is also solid and it's a damn shame he didn't direct more films as his three spaghetti westerns and two poliziotteschi films are classic. His stylish directing is made even more beautiful with Ennio Morricone's wonderful score. Is there a bad Ennio Morricone score? I don't think so! Solimna also garnishes the film with some well placed humor, my favorite being a scene where Cuchillo gets thrown into the same prison cell as Cleef. Cuchillo's reaction is hilarious! The Big Gundown was such a hit that Sergio Sollima returned to direct a sequel entitled Run, Man, Run which focuses on our Cuchillo character.

The worst thing about The Big Gundown is that it isn't available on an officially released DVD. Sony, where are you on this! It has been proved this film has plenty of fans yet you still sit on it! It bugs the shit out of me that the sequel Run, Man Run got a wonderful DVD release from Blue-Underground yet The Big Gundown is still unavailable. One fan however got sick of waiting. This fan goes by the "clever" pseudonym "Franco Cleef" and he undertook a great headache of doing a wonderful widscreen transfer splicing in cut footage from the American release. Franco Cleef released an unauthorized DVD-R of the film and so far this is the only version fans are able to get their hands on. If you can't wait for an official release then this version will definitely keep you satisfied until there is. Thanks again to Bill for scoring me a copy!

The Big Gundown Trailer
Posted by Cronosmantas at 7:25 PM