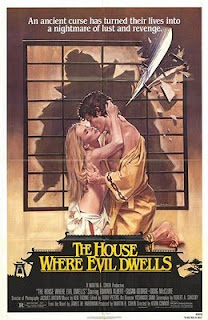 The plot is actually similar to a recent horror film entitled The Grudge (hell even look at the new DVD cover, it looks extremely similar to the original DVD cover for The Grudge) with an American family moving into a house in Japan that just happens to be haunted. Decades earlier a samurai came back from battle only to find his wife cheating on him. He beheads her lover, kills her and then commits Harry Kerry. For same damn reason, as the motive is unknown, the ghosts decide to occasionally possess our new residents and the husband's boss to eventually reenact that awful night. In between lots of silly ghost shenanigans ensue with some just jaw droopingly bad.

The cast for the most part is rather good and we get seasoned actors Edward Albert, Doug McClure and the sexy Susan George trudging through their bad material. Sadly director Kevin Connor doesn't know how to present the film: either as a serious scary movie or tongue-in-cheek. His unfocused directing makes the film bad plain and simple.

The worst part of his direction is his handling of the damn ghosts. The ghosts are presented as cheesy transparent images that walk around our cast, making "scary" noises that only the audience can hear. The presentation of the ghosts is no better than films 30 years before and the directer seems to know it so he presents them in a rather silly fashion. The absolute worst (and most unintentionally funny scene) has a ghost's head appear in a little girls bowl of soup, make a silly face causing her to cry. The most "what the fuck" moment has to be a giant crab attack.... no I am not making this up. Our ghosts take the form of giant, monstrous crabs and chase our child throughout the house while making hokey "scary" sounds.

Well... is there anything good about The House Where Evil Dwells? Well Susan George gets naked. Fans of her will get an eye full as she bares it all for some sex scenes. It's pretty fucking pathetic that the best thing about a haunted house flick is the nude scenes! The production values are also good and the film looks like it had a decent budget but what good is that without a good script and a director that doesn't know what direction to take the film in?

So what we have is an extremely unfocused haunted house picture that comes off silly in a very dumb way. It's really only worth watching for Susan Georges nude scenes and a few unintentional laughs but those are so far between that it hardly makes it worth sitting through. If you want to see a now rather obscure haunted house picture that actually has some genuine scares then I suggest hunting down The Evil starring Richard Crenna. That's just one of the many haunted house pictures better than The House Where Evil Dwells.


Posted by Cronosmantas at 6:59 PM