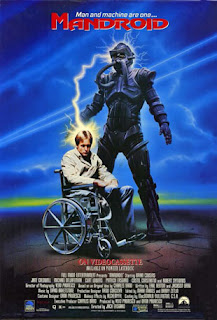 Mandroid... really? Can we get a more geeky, silly title than that? They couldn't come up with a better name? Well I guess Mandorid is rather fitting as it lets the audience know exactly what type of film they are getting into: a cheap, bad, direct-to-video quickie that only the likes of Full Moon Entertainment could make. Believe it or not this isn't the first time producer Charles Band used the term "mandroid" as he coined it for a character in his laughably bad 1986 post nuke stinker Eliminators, but that's a whole other story. Well back to...(snicker)....Mandroid!

Our typical science fiction story opens with a group of scientists test running their new creation which is called...oh here we go again... Mandroid (I can't help but laugh every time I type that ridiculous word!). The Mandroid is an ANDROID that is controlled by a human wearing what looks like a virtual boy helmet. Test run goes well until our head scientist lets his partner know that he's selling the work to the American's which in turn pushes his partner over the edge and he flakes out. He decides to steal the Mandorid and in the process, he gets a canister of mushrooms shot that he was holding (more on that interesting story element later!) which contents splatter on his face and disfigures him. Know even more psychotic, ala The Joker, he gets a mute sidekick to take revenge and by-the-numbers plot devices ensue.

There is absolutely nothing original in this science fiction drivel of a film. It's your same basic scientific research partner feels cheated, turns evil, and tries to steal creation bullshit. Knowing the story is the same run-of-the-mill crap, our filmmakers add this odd subplot about mushrooms. Apparently these ancient mushrooms were discovered preserved in rock and they have the ability to cure human diseases when exposed to radiation. The "Mandroid" seems to have been created as it can handle the mushrooms as it can take the radiation. What? They take a tired sci fi plot and add this ridiculous mushroom turn to it?

The acting is surprisingly decent but that doesn't make up for the fact the plot is ridiculous, cliché, and uninteresting. The film just meanders along without pulling the audience into the plot and by half way into the film I really didn't care anymore. The Mandroid costume also looks cheap and hokey and I almost burst out in laughter ever time it made an appearance onscreen, no matter how hard director Jack Ersgard tries to make it threatening.

You can tell Full Moon was desperately trying to make their own comic book inspired film but it doesn't come near the cheesy funness of their other comic inspired film Doctor Mordrid. It just lacks that likable cheesy goodness of their other films from their classic era (1989-1995). Though Mandroid is forgettable Full Moon material, it somehow inspired a sequel entitled Invisible: The Chronicles of Benjamin Knight which was promised to us at the beginning of the end credits giving me the impression it was filmed back-to-back with Mandroid. Was Full Moon really that confident that Mandroid would be that big of a hit on the home video market to bank a sequel? Hard to believe...