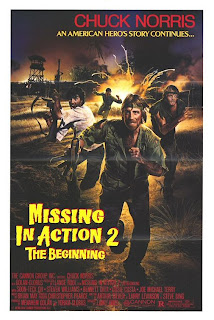 As you can deduce from the subtitle, Missing in Action 2 is a prequel to the original film. A prequel is fine and dandy as there was enough plot for the filmmakers to tell the back-story of Braddock before escaping Vietnam and going back to rescue POWs. The problem is the filmmakers decide to shift the tone from the seriously taken original to a total cornball approach.

Our film opens with Braddock and his Platoon all getting captured by Vietcong and the rest of the film has the group isolated in a prison for years and the film showcases all the torture and hard times they go through under the iron fist of prison warden Soon Tek-Ho (I always thought his name was cool). If action films weren't predictable enough, prequels are even more predictable because thanks to the first film we all know that Braddock will soon rise up and save the day, killing our sadistic warden and rescuing our POWs and of course losing an emotional few along the way.

Like I mentioned before director Lance Hool opts to go for a total cornball approach to this film making it FAR more cheesy than the original. The film even opens with the movie still framing on each character, typing their name on the bottom of the screen and then having an MIA stamp (complete with cheesball sound effect) punch on top of their face. Cornball exactly!

Norris thankfully keeps his psychotic edge to his character from the original film and Soon Tek-Ho is wonderful as the villain but the rest of the cast's acting talent is far below par. Thankfully there's enough action to keep one from wincing in pain from the painful acting. It is also a criminal act that Jay Chattaway's original score is not brought back and instead we get a Swiss cheesy score provided by Brian May (No, not the guitarist of Queen but the music composer for the Mad Max films).

I have read, but have found no proof, that Missing in Action 2 was actually filmed before the first Missing in Action but Cannon opted to release "part 2" first as it was a far stronger film. Being a Cannon fanatic I have exhausted my research and still have found no proof of that fact. If it was made first then that would help explain some of the awful continuity. First of all the prison camp resembles nothing of the original and none of Braddock's nemesis' that tortured him in the camp return. Very lazy on the continuity factor but continuity would only get worse with the next entry.

I enjoyed Missing in Action 2 enough for what it was but it is hands down the weakest film in Missing in Action trilogy. Perhaps if Lance Hool gave it a similar tone to the original I might have liked it more but as is it is just another cornball B-action sequel...errr....prequel.

Written By Eric Reifschneider
Posted by Cronosmantas at 7:40 PM