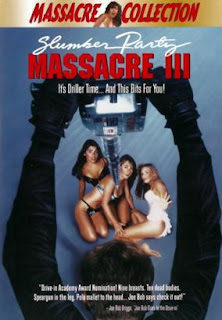 After the outrageous second entry that failed to live up to over-the-top concept, our filmmakers of this "respectable" franchise decided to get back to the driller killer basics but they only forgot one ingredient, and that's entertainment.

No plot or character connections to the previous films, this time we are introduced to some young teens on the west coast living it up on the beach and they all decide to have a slumber party. The girl who is putting on the party invites her new boyfriend... who just happens to be a psychopath that loves using a drill to kill beautiful women fueld by the fact he can't get it up in the bedroom. That's really all the plot there is... scantily clad women running from a killer in a locked house.

Director Sally Mattison seems to be trying somewhat with the plotless script by giving us some interesting camera shots (the beneath the sink shot was respectable) but the film is so devoid of worth that it makes her efforts seem pointless. The script tries to set up the creepy neighbor as the killer but it comes to no surprise that our new boyfriend is the killer. It might as well be the tagline on the fucking poster artwork - "Creepy Boyfriend has E.D. and likes to kill women with a phallic drill."

The acting is better than expected but with this plot, even great actors would look like they're going through the motions. I could also tell the movie was shot in a very short time as it is loaded with goofs and continuity errors.

I respect the fact the filmmakers wanted to get back to basics but they forgot the fun black humor present in the original and all we are left with is another completely pointless slasher sequel. It is arguable whether this is the final entry into the Slumber Party Massacre franchise as 13 years later a despicable film entitled Cheerleader Massacre was made which has a returning character from the first original and even utilizes stock footage from that very film. I recommend making this your final film in the series. Even though this sucks, it's not near as bad as that so-called film Cheerleader Massacre!