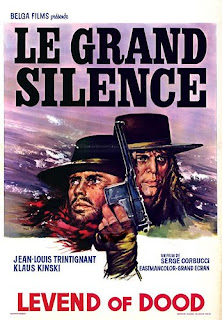 After Sergio Leone, the second most prolific director in the spaghetti western genre has to be a man with a similar name-sake. That similar name would be Sergio Corbucci. Comparing the two directors is difficult though as Leone was always focusing on making bigger grander epics whereas Corbucci was satisfied with making smaller scale entries. His most popular film is the rather trashy Django but not all his films followed that same mold. Django may be his most popular film but The Great Silence is hands down his crowning achievement. This dark, brooding and depressing spaghetti western in my humble opinion ranks alongside The Big Gundown for being the best spaghetti westerns after, of course, the Leone epics.

Taking a departure from the Spanish desert landscapes that were the setting for most other entries in the genre, Corbucci decides to make this a snow bound setting taking place up in the Utah mountains during winter. We have a mute, lone gunmen roaming the mountains, defending defenseless people against bandits and thieves by blowing off their thumbs. He comes across a town where a sadistic bounty hunter (Klaus Kinski, deliciously evil in the role) is starting to ruffle things up giving its sheriff (Frank Wolff) a hard time. A beautiful African American women hires our mute gunmen to kill Kinski (as Kinski murdered her husband) but the job seems to be rather difficult at first as he gets no help from the sheriff thanks to him getting murdered and in typical Corbucci fashion, our hero even gets beat to near death. Nursed back to health by the beautiful women that hired him, he falls in love and tries to take Kinski out again. Will he succeed?

I love the dark atmosphere Corbucci brings to the film making it bleak and serious (the snowbound setting also helps). It's hard to believe that the guy who directed Django would also be responsible for such a seriously taken western. Don't get me wrong as I also love Django but I had more fun with it for its trashy elements. Not The Great Silence as this is a serious western deserving respect for good filmmaking.

The cast is just superb, lead by French actor Jean-Louis Trintignant, a great actor that sadly only appeared in one film in the genre. Even though he only made one western, he made damn sure that it was a great one! Kinski is just so damn evil as our villain. I rarely see an actor that is so good at playing a sadistic villain with absolutely no conscience so perfectly and his performance is as cold as the icy setting! It's such a damn shame the dubbing of his character is a little off, hindering the evil nature just a hair.

Corbucci's direction is solid but people shouldn't compare his style to Leone as again they are very different. Leone uses long, smooth shots where Corbucci's style is a little more sloppy, full of dirty zooms and pans. It all adds to the grittiness of the film. Corbucci's style and Ennio Morricone's lonely score fit as nicely together as Leone and Morricone.

I can't praise this spaghetti western enough. Other than Kinski's dubbing I wouldn't change one aspect. You're probably asking why I wouldn't give the film 5 stars then? Well only a special few films are awarded that highest praise but on a western scale, The Great Silence would definitely get a 5. This is a dark, bleak spaghetti western that is a definite must own for any fan. The Great Silence is one of this reviewers favorite films, that's for sure. I do find it criminal that The Great Silence got a very poor release in the United States, if at all, whereas Corbucci's lesser examples in the genre, like Navajo Joe, got wide releases by big American studios.

Bonus Praise (Spoiler): The ending left me with my jaw on the floor! Corbucci had real balls to kill off our lead hero and heroine by the hand of our villain. Not many filmmakers would go this far! Knowing damn well people usually prefer "happy" endings, he still decides to go with the downbeat ending proving that the good guy doesn't always win. Sometimes Evil prevails even though we all don't want it too. The ending is sure to stick with the viewer. Japanese distributors however weren't happy with the ending so Corbucci was forced to shoot a "happy" ending where our mute hero saves the damsel and kills all the villains. This "other" ending goes against the tone of the film and is actually rather cheesy. This alternate "happy" ending is available for viewing on the out-of-print Fantoma DVD.

The Great Silence Trailer
Posted by Cronosmantas at 6:11 PM