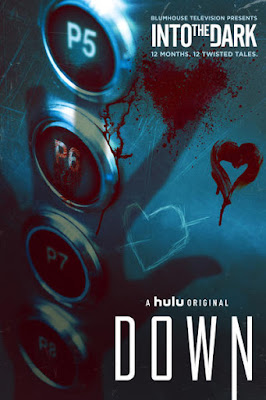 Like many of the previous Into the Dark entries, there is a sense that Down is trying to be clever and execute its story on a tight budget. Two people, a man and a woman, are leaving work late right before Valentine’s Day and their elevator gets stuck leaving them trapped for a possibly long weekend. The limited setting, the miniscule cast, and the initial set up all spell out a great way to produce a tense and claustrophobic situation on a small budget. Stamm and company execute it well too. He maximizes the atmosphere of the elevator, relies heavily on character interplay, and when the film starts to derail in the second half (moving out of the elevator for a portion of the third act too) he maintains the increasing pace of shock and pop to deliver on the thrills.

To make things even better, Stamm and company really take the time to develop the two characters. Almost for the entire first half, Down doesn’t feel like it’s going to be a horror film. It spends a great deal of time building the characters and their chemistry as they find themselves getting closer and more intimate with one another as they wait for rescue. In fact, it almost made the experience tenser. The audience knows that shit will eventually hit the fan and I spent a ton of this time desperately looking for clues to see where the film was going to go. Even though the characters may not showcase that tension, it’s there and it might be the best magic trick that Down has to offer. We know things will go badly, but the characters act calm and thoughtful for most of the first half of the film.

Once it’s revealed where Down is going with its narrative, Stamm gets to play more with the visuals in fun ways. Some great performances in the first half and the chemistry between the characters pays off in dividends as the film progresses and starts to unravel into horror territory. The film moves out of the elevator and into some pretty fun sequences, including adding in a few other characters as the terror seeps from the elevator and out into the ‘real’ world. Down then takes some fun twists and turns as it maneuvers into the third act, never losing its pacing and ratcheting up the dark humor as it goes.

The various films that have been included in Hulu and Blumhouse’s have been shockingly solid thus far and Down is another one to add to that list. Stamm continues to prove that he’s an underutilized talent in the horror film industry, this film features some great performances, and there’s a great balance between the drama, horror, and dark humor in the narrative. Although it might not quite top The Body in terms of the series, it’s damn close. All in all though, Down gets a hefty recommendation for fans of the series and those looking for a fun low budget romp.