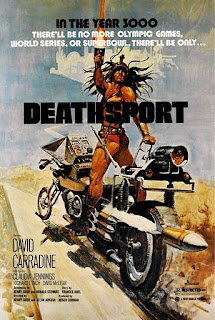 Three years after his surprise hit Death Race 2000, Roger Corman no doubt needed some quick easy cash so he decided to produce this insulting pseudo-sequel that acts more like a rip-off of the previous film. Employing David Carradine once again the filmmakers set out to make another futuristic film about a deadly sport, only changing the car aspect to motorcycles. The result should have been fun but instead comes out cumbersome and tedious.

1000 years in the future in a post apocalyptic world, we have barbaric warrior like humans being hunted down by "civilized" humans that live in domed cities (shown with horrible matte paintings). Our "civilized" humans use high tech "deathbikes" to capture these roaming bands of warriors and use them to fight in Death Sport, an arena based game where they force the prisoners to fight on "deathbikes." David Carradine is one of these barbarians captured and forced into playing but he and his playmate girlfriend (don't worry, she does get a nude scene) escape and most of the rest of the film is Richard Lynch and what seems to be a never-ending group of soldiers riding motorcycles trying to capture them.

The main problem with this film is that there is literally no fucking script. It feels like a ten page script stretched out to 90 minutes and directors Allan Arkush and Henry Suso (a pseudonym for Nicholas Niciphor) mostly fill the film with people riding motorcycles from one corner of the shot to the other. Since every time the motorcycles leave the frame they have an annoying ricochet sound effect, we then are graced to hearing this damn sound effect what seems like a thousand times! The sound effects crew should be shot for filling the film with this extremely annoying sound! Not only are the sound effects annoying but so is the awful score, which is completely unfocused and seems like our composer fell asleep on his keyboards.

Since there is no plot to speak of, the filmmakers decide to throw in some exploitative nudity our way and weirdest of these sequences is, I kid you not, a Christmas light nude torture room as our president of the city as some kinky fetish with electrocuting naked girls. They also fill the last half of the film with loads and loads of pyrotechnics and lots of slow motion explosions. Even with all this added crap they still didn't have enough to fill the ninety minute mark so they decided to add a completely pointless "subplot" of David Carradine trying to rescue a young girl from cannibal mutants. Yes it's as dumb as it sounds.

This film has nothing that made Death Race 2000 such an entertaining B-movie. The sardonic humor and political satire are gone and we are left with filmmakers with essentially a plotless film taking their material seriously. The result is rather boring, tedious movie affair that even the likes of Carradine knows is bad as he seems to be phoning in his performance. Only the most hardcore B-movie or Corman fanatics will enjoy this drivel.

Bonus Rant: Also what exactly is "Death Sport"? There is no good definition of the game in the the film. The rules are made very clear in Death Race 2000 but I have no
idea what the main goal of Death Sport is... other than killing.