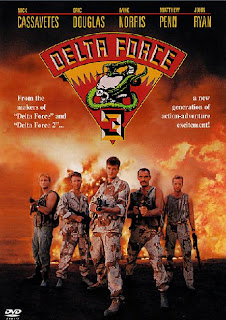 When I first heard of Delta Force 3 I remember thinking "How the fuck can Cannon make a Delta Force sequel without Chuck Norris!" The cover art only portrayed a group of second generation actors that were either children of siblings to famous Hollywood folk. Curiously got the best of me so of course I bought it but my original inclination was right, Norris is SORELY missed.

The plot is completely uninteresting as we are introduced to our new Delta Force team as they prepare to head into the middle east to wipe out a terrorist threat that is sending human bombs to America. It's the same basic plotline to a thousand other B-action films.

The film might have been somewhat likable if Norris returned (notoriously he turned it down due to a near fatal helicopter crash on the set of Delta Force 2) but Cannon forged on to complete their Delta force trilogy with their new young cast (resulting in the cheesy tagline "Younger and tougher... because they have to be). As expected the new Delta Force can't make up for his absence. Norris has a charm to him that none of our new cast, no matter how many of them you add, can make up for. Norris's son, Mike Norris, does make an appearance here. So does Sean Penn's brother Matthew Penn, John Cassavete's son Nick Cassavetes, and Michael Douglas's son Eric Douglas. They of course don't hold a candle to their more famous relatives.

Delta Force 3 really shows Cannon as a shadow of their former selves. They use to make B-action films that were highly entertaining now they are reduced to making direct-to-video drivel that insults their B-action franchises. The production values are low, the acting is bad, the plot is forgettable. All this was directed by Sam Firstenberg, the same guy that gave us such grand Cannon efforts as American Ninja 1 & 2 as well as Revenge of the Ninja. Shame on you Firstenberg for not bringing that same magic to Delta Force 3. It desperately need that B-action magic... as well as Norris, Chuck Norris that is.

Bonus Rant: Like the Delta Force 2, the filmmakers also had some issues with the subtitle here. All in carnations on home video had the simple title "Delta Force 3" on the cover artwork but the film itself always portrayed the "Delta Force 3: The Killing Game." Come on guys, make up your mind! Subtitle or no subtitle!