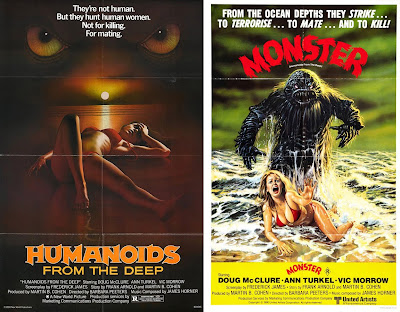 In the old Universal monster movies, our beastly guys in suits always went after the women and carried them off into dark corners. Exactly why were they so interested in women? And why did they always want to carry them off to secretive hideaways? Well Roger Corman answers that question with his trashy exploitation monster movie Humanoids From the Deep (also released theatrically as Monster) showing that monsters want sex too as our monsters carry off damsels in distress in order to have their way with them. The result is a schlocky horror film mixed with extremely tasteless sequences that will be sure to offend many viewers in the audience.

Near a coastal community, a group of scientists are experimenting with genetically enhanced salmon. Unbeknown to them their creations are growing at an incredible rate into humanoid looking beasts that begin to kill local animals at first. Soon they begin wanting to mate and move to the shores, killing the men and raping some women. Two rival fishing groups take matters into their own hands to kill the monsters.

In praise for the film, it really marks the end of the "guy in rubber suit" monster films. The story is just a more bloody, exploitative version of the lovable monster movies from the 50's and before updated for 80's audiences that craved more carnage. In that aspect alone I like it as I have a soft spot for monster films. The cast is also great and their performances really add to the films quality. There is even an underlying theme of racism in the film which is brought to a head when the animal killings begin.

The film however treads a little too much in to the exploitative section of films with its graphic sequences of inter-species rape. I completely see why many people were offended by this when it was released as it is rather degrading to women. Apparently the film's rape sequences weren't as graphic when originally shot as director Barbara Peeters made the scenes take place mostly off camera. Roger Corman, upset with the results, demanded more blood and nudity so he had the second unit director Jimmy T. Murakami go and film more nudity, gore, and graphic rape scenes. You can really tell a different director made these sequences as they really don't flow with the rest of the film. It's a cheesy monster movie with good actors with a nicely flowing plot when suddenly a sequence of graphic rape rears its ugly head into the picture.

I do have to mention the great monster suits created by Rob Bottin (The Thing) and Chris Walas (The Fly). These suits look great for a low budget monster film! The bloody effects will also wet some gorehounds appetites (the new release from Shout Factory is the uncut international version of the film under the title "Monster" which also includes a graphic decapitation not ever seen the U.S. market) especially during the final moments of the film when our beasts attack a carnival.

I should have enjoyed Humanoids form the Deep much more than I did. It's got a solid cast, a schlocky monster movie plot, great monster designs and added 80's blood and carnage. The added rape sequences must have just left a bad taste in my mouth for me so I just didn't enjoy it as much as I should have. This however is a must see for fans of B-movie cinema.

Humanoids From the Deep Trailer
Posted by Cronosmantas at 6:54 PM