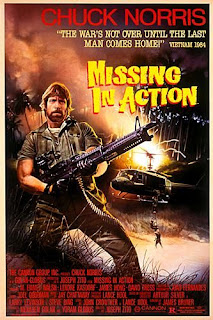 When news came out in the early 80's that there were still American POWs and MIAs in Vietnam, it quickly became fodder for Hollywood to make gung ho action films about. The most popular film with a story surrounding a one man army going in and rescuing American MIAs in Vietnam is of course Rambo: First Blood Part II. That film however wasn't the first and the Cannon group beat Stallone to the punch by a year with the release of the Chuck Norris vehicle Missing in Action (not counting Uncommon Valor, which was about a group of men).

Norris portrays Col. Braddock, a POW that has recently escaped after years of imprisonment and has made his way back to the United States. While back in the normal world he becomes angered at the public and government as they turn a blind eye to the fact that there are still American POWs in Vietnam. The Vietnam government refuses to admit it so Norris's only option is to become a one man army and with the help of an old war buddy (M. Emmett Walsh) decides to go back to 'Nam to rescue American MIAs.

Missing in Action holds a special place in this reviewers heart as it not only marks Norris's first collaboration with Cannon films but it was also the first Cannon film I remember seeing. The mix of over the-top heroics, heightened violence, and B-movie qualities made this reviewer a fan of the production company for life. Cannon spared no penny here as they gave the cheesy action film a solid budget and director Joseph Zito proudly shows it on screen lots of explosions and great stunts.

What I like about this film is that it's a cheesy action film taken seriously and Zito even punctuates the action with some intense violence. Norris is also deadly serious in his career defining roll of Braddock giving the hero an almost psychotic edge, an edge that many of Norris's characters to follow would lack (even Braddock in later sequels). M. Emmet Walsh is likable as Braddock's lazy army bud but the film truly lacks a villain. Sure there is James Hong and his second in command, but they only make a appearances so often and the villain in the film really is the army force of Vietcong. I felt the film would have been stronger if they gave the enemy a face and a truly sadistic leader (this is something the sequels would get right.)

Missing in Action proved to be a tremendous success at the box office allowing there two sequels to be made as well as giving Norris a solid contract with Cannon and a majority of his action films to follow would be under that glorious Cannon logo. Norris and Zito would team up again in a similarly toned violent action film with Invasion U.S.A., a film that even has more of a cult following.