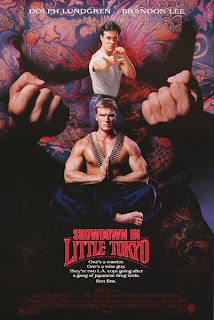 Mark L. Lester is one of the kings of higher budget cheesy action films despite only directing a handful of films in the genre. This guy directed perhaps the epitome of cheesy action films with Commando in 1985. Can a film starring Dolf Lundgren and Brandon Lee hold a candle to the cheese god of Lester's Commando? Sadly not but then again I went into this film not expecting the same cheesy goodness.

The plot... what plot. We have Dolf Lundgren as a cop in Little Tokyo in L.A.. He basically runs around beating the shit out of people. He then gets a new partner in the form of the late Brandon Lee, a young preppy guy that usually just makes smart ass one liners. So they both go around just kicking the shit out of everyone in different settings including restaurants, public baths, etc. All their ass kicking is going well until Dolf discovers the man who killed his parents, so they both decide to kick ass to get revenge.

Typical with Mark L. Lester action films everything is anteed up. In Commando Lester went to great lengths to show that Arnold Schwarzenegger had larger than life strength and he goes to the same extreme here with Lundgren. Lundgren even flips over a car with his bare hands, then while driving away shoots the gas tank to kill some bad guys. He also swings into a an illegal fight with a rope and also takes down five baddies while holding onto a cup of coffee, not spilling a drop. Lee on the other hand is just in the film to provide "comic relief" which mostly falls flat. Cary-Hiroyuki Tagawa is our villain. He almost always plays a villain but like always he's good as the antagonist. He's pretty fucking hardcore also as he even beheads a girl while attempting to take her from behind.

As expected the worst aspect of the film is by far the acting and dialogue. Lundgren and Lee were never known to be great actors and they still prove they can't here. The dialogue just makes their performances worse as they have to spew out filth like "sometimes you do the right thing because you have to do the right thing." A little redundant don't you think? The absolute worst line comes during a firefight at Lundgren's home and Lee turns to him and says "Just in case we get killed I just want to say you have the biggest dick I have ever seen on a man." What man says this to another man unless he's a homosexual? Talk about homosexual undertones! Undertones, more like overtones! Also did he really have to end the remark with "on a man"?

Though a larger budget cheesy action film, Showdown in Little Tokyo fails to live up to Lester's other grand cheesfest Commando or even Class of 1999. The violence again is plentiful but so is the bad acting and dialogue. I still had a fun time for the most part but the big "endowment" line still throws me for a loop to this day. Why oh why did Brandon Lee agree to say it? I bet he just rolls in his grave every time some action fan watches this.