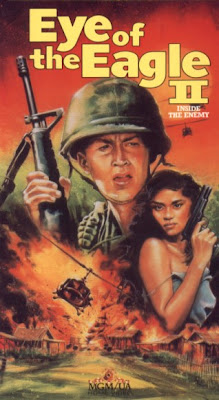 The original Eye of the Eagle was a lame copycat of the macho heroic films Rambo: First Blood Part II and Missing in Action. It was a bad, bad no brain action film and I went into this sequel with the same mentality that it was going to follow the same connect-the-dots formula. However I became completely surprised as Eye of the Eagle II: Inside the Enemy (more on that subtitle later) is not a moronic macho guy with a machine gun movie. It surprisingly is an "emotionally" driven low-budget war film that's main focus is on characters, not low budget action antics.

The film opens with a small group of men going through boot camp and then jumps to them during the Vietnam War. Todd Field is our main character Glenn and he and his platoon are left on the ground when an attack on a village gets botched. He marches through the jungle after the rest of his platoon is killed off when he comes across a Vietnamese girl. He and the girl survive the jungle and get back to safety but once she arrives she is taken as a prisoner. Glenn later learns that his commanding officer is corrupt in opium dealing and in turn has gotten the girl hooked on heroin and forced her into prostitution. Glenn goes to his officials but that only makes his commanding officer mad so he takes it upon himself to rescue the girl, and escape the country while dodging the assassins sent after them.

Like I mentioned before this film is nothing like the first film despite it being produced by Cirio H. Santiago, director of the original. The tone is COMPLETELY different and there is no plot or character carryover. No doubt this was filmed to be a completely separate film but was later retitled to be a sequel to Cirio's lame action film due to the fact they are both low budget Vietnam films filmed in the Philippines.

The acting, especially for a low budget Filipino film, is acceptable and I really dug the emotionally driven characters. Still, the low budget nature of the film does hinder it's emotional impact as some of the editing and production values are extremely lacking. The score is most terrible and doesn't fit many of the sequences it overlays. An attack on the village has background score more suited a car tailing someone as opposed to a horrific display of war. The music almost completely ruined that sequence.

Overall this isn't a bad low budget Vietnam flick and it's a damn shame more people don't know about it. I literally feel like I am 1 in 10 people that have seen the damn thing! Perhaps if the title didn't connect it to a lame action film it would be more widely seen and perhaps liked.