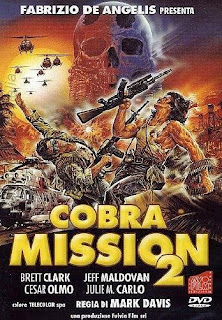 It may just be me but I highly doubt that "Cobra Mission" garnered enough money to warrant a sequel. Then again these late 80s macaroni combat films cost $.35 to make so even if 10 people go to the theater it makes a profit. Even so sequels in the macaroni combat genre were a RARE event (No "Inglorious Bastards 2" doesn't count!). Even so I can think of MUCH better macaroni combat films to make a sequel to other than "Cobra Mission" (How about a TRUE sequel to the classic "Inglorious Bastards"?). Needless to say director Fabrizio De Angelis of the original returns to produce (directing was left up to Camillo Teti) this three year later sequel that really has NOTHING to do with the first "Cobra Mission" other than the title. They could have called this poorly made shitfest "Viper Mission" and it would have made just as much sense.

Well we get Brett Baxter Clark as a Vietnam vet (fans of these trashy Vietnam war films will recognize him from "Eye of the Eagle"). Right off the bat we get a poorly put together flashback explaining how he attempted to go back to 'Nam to rescue some POWs. Well due to that infraction the government fakes his death but they still hire him from time to time to go on top secret missions into 'Nam. His new mission is to go back into 'Nam with a group of mercenaries to kill some military leader. Snore....

I'm all for low budget films but this film is the pits as director Camillo Teti (who previously worked as production manager on a few Leone films... perfect experience to make him a good director... sheesh) doesn't know how to utilize his limited resources. The action sequences are lame and poorly staged and all of our heroes are as boring as watching paint dry and peal. The films plot twists are predicable and the film overall is a cure for insomnia.

Even for a late 80s Macaroni Combat film this is pretty lame. Fuck it never even got a releases in America until it's less-than-stellar DVD release ported from a Japanese VHS with burnt in Asian subtitles. Hell I feel like I'm 1 in 20 people that actually saw the damn thing as there are only 8 votes for the movie on imdb.com. There aren't even any reviews for it! Yes it's so bad and obscure that bad movie fanatics don't even take time to hunt it down. On the plus side the VHS transfer VideaAsia DVD is actually watchable, unlike their transfer for the first "Cobra Mission" film.