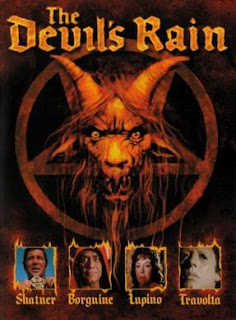 For our 666th review here on Blood Brothers you would probably expect us to review something along the lines of "The Exorcist", "Rosemary's Baby" or even the obvious "The Omen". Those would of course be too predictable for this review slot. Well I figure the devil is a real shitty person spreading evil and other shitty means around the globe so it only makes sense that review slot 666 should hold a review for a shitty film based on the devil's dirty deeds. The winner for this slot is the 1975 satanic cult film "The Devi Rain."

I know what you're wondering. Why is it "The Devil's RAIN" and not "The Devil's REIGN." No they didn't pull a Slayer (a nod that only metalheads will recognize), it's because rain (as in water falling to Earth) actually plays an import part of the plot. I know satanic cult movies and H20 falling to falling from the sky are like mixing water and motor oil as it makes no sense but just role with it.

Well during a rain storm, cowboy hick Mark Preston (William Shatner, still not being able to break free of his Captain Kirk typecasting) is horrified when his father shows up on his doorstep... get this... MELTING. Yes, he is melting in the rain. Right away the film is letting you know you're going into a cheesefest (melting cheese that is!). His father warns him of a devil cult located in a secluded ghost town so Shatner arms himself with his family's huge religious medallion and heads out to take the cult down. He of course disappears and that's when news reaches his brother (Tom Skerritt) so he and his girlfriend head out to find him only to discover the Satanic cult (lead by Ernest Borgnine) in the ghost town is all too real.

This film could have been totally creepy but thanks to the writers adding in so much hokey shenanigans into the mix (Earnest Bornine turning into a goat for example) the film just degrades into unintentional laughter. These guys actually got pointers from actual Satanists Anton LaVey as a technical advisor? Shit....

Director Robert Fuest also doesn't seem to know how to treat the material and instead of going for the tongue-in-cheek approach he did so marvelously in "The Abominable Dr. Phibes" and its sequel "Dr. Phibes Rises Again" he decides for the most part to treat this material seriously and unintentional laughter infects the viewer (this reviewer found himself laughing uncontrollably multiple times).

The best part about this silly little film is the cast. Where else can you get Ernest Bornine, Tom Skerritt, Eddie Albert, John Travolta, Ida Lupino and William fuckin' Shatner in the same movie? Hell you even get John Travolta in his first film role (don't blink or you'll miss him and if you don't you might not recognize him thanks to hideous makeup covering his face giving him the appearance of a masked Michael Myers). Surprisingly all these actors also take the silly film seriously (even to the point of over-acting) which only serves in anteing up the hilarity.

"The Devil's Rain" is a very poor film full of hokey shit, plot holes and other goofs (damn the setting is hot and dry the next day considering a rain storm flooded the area only the night before). Still, thanks to unintentional laughs and a great cast I have to bump this film up to 2 stars just for the entertainment value alone. Oh no! Here comes the rain again! I'm melting! Melting! Oh, what a world!